Column: No substitute for heart, passion 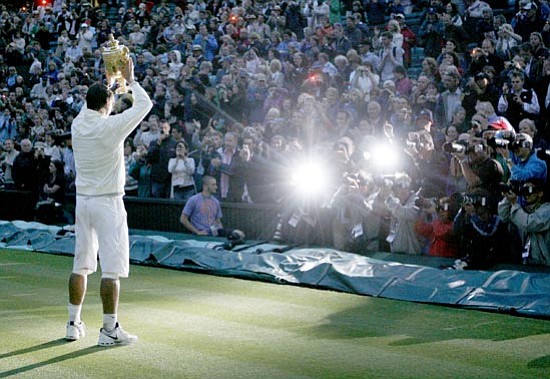 The Associated Press/<br>Anja Niedringhaus<br>Spain's Rafael Nadal hoists the trophy to celebrate his defeat of Roger Federer in an epic men's singles final on the Centre Court at Wimbledon this past Sunday.

Originally Published: July 9, 2008 6:21 p.m.
Tweet
Anyone who watched the men's final at Wimbledon this year received a remarkable example of what having heart and talent is all about. Both runner-up Roger Federer and champion Rafael Nadal - who won in five sets 6-4, 6-4, 6-7 (5), 6-7 (8), 9-7 - played what's being touted as the best Wimbledon final ever. It took almost five hours to complete, not counting the two rain delays.Two points one way or the other and it could have been either player's championship. So why did it go the way it went?In my mind, both players won.Rafael may have kept his mental outlook a little more positive than Roger overall, and certainly his game has improved over the past two years, but they both gave every physical and mental fiber they had in their bodies.The focus and determination was clearly etched on their faces. You could feel their unwavering spirit and exactness of what they wanted to do with each shot. Their posture showed their optimistic mindset and strategy; the will power, endurance, stamina, attitude and temperament were on par with the athletic genius they've developed over years of tournaments, matches and practice sessions.And right after the last point was played and both players were dealing with enormous emotion, they only had favorable things to say about one another, which shows a maturity many people never reach in compassion, sensitivity, and empathy - a solid nucleus to a true and balanced person and champion.How do you reach this level of achievement in body and spirit?It may have something to do with what Arthur Ashe once said about all the great players he had known. "All accomplished players go through a stage in their lives when hitting the ball properly on critical points means more than winning or losing."It's physical and it's mental, and it's a trained part of what any talented athlete must come to terms with under pressure. Make sure to reward yourself for that effort.There are no short cuts to realizing a dream that is meaningful.It takes organized planning, desire, visualization and belief, specialized knowledge, persistence and positive reinforcement while overcoming fear and doubt. In professional sports some physical characteristics are almost necessary, but some have overcome real obstacles to achieve what they believed they could.Time, effort, good coaching, match play, and being surrounded by parents and others who also believe in your dream will help make your goals a reality.The following players couldn't have achieved what they did without all of the thoughts and actions above: Pete Sampras, Boris Becker, Steffi Graf, Martina Navratilova, Billie Jean King, Rod Laver, Jimmy Connors, Bjorn Borg, Chris Evert, Andre Agassi, and the list of tennis players go on and on.We're lucky to have some really great players in the game of tennis with the likes of Roger Federer and Rafael Nadal. They have heart. If you watch closely what they do, how they concentrate, keep their wits, how they deal with shots under pressure with never-say-die attitudes, and the grace they seem to keep while winning or losing ... you can learn a lot, no matter your age or ability.(Chris Howard is a local USPTA Tennis Professional with over 30 years in the racquet and fitness industry. He can be reached at 445-1331 or choward4541@q.com)
Report a Typo Contact
Sign up for Courier e-News Alerts
Most Read
7 days
30 days