Married 71 years and still in love 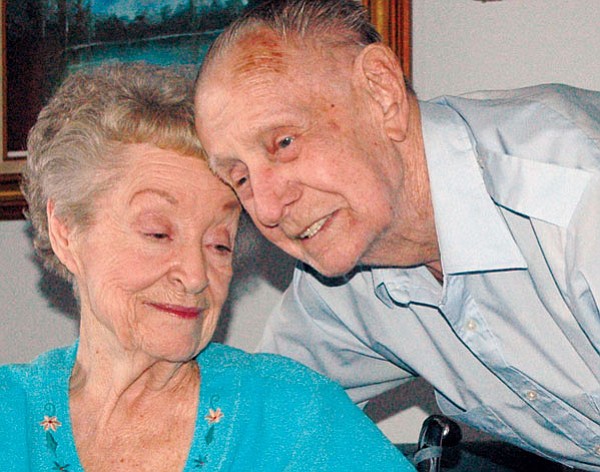 Ralph and Mimi Meixner are still very much in love after 71 years of marriage.<br>TribPhoto/Heidi Dahms Foster

Reflecting on 71 years of marriage on Jan. 27, Mimi Meixner, 86, has a surprising bit of advice for other 15-year-old girls contemplating marriage. Don't marry that young.

Not that she regrets her seven decades of wedded love with husband Ralph, 92. It's just that both of them agree they had to work hard and fight through to make it.

Today, they are obviously in love, gazing fondly at each other across the living room of their Prescott Valley home.

The couple met while Ralph was working at Mimi's uncle's restaurant in Fort Lauderdale, Fla. They both thought the other was the most gorgeous person they had ever seen.

"I couldn't believe a girl was as beautiful as she was," said Ralph.

The attraction led to some stolen kisses behind the restaurant, and when Mimi's uncle found them out, he fired Ralph.

Ralph moved on and got a job in Miami, driving back to see Mimi whenever he could. About a year later, the two eloped, getting hitched by "the marrying judge" in West Palm Beach. Mimi was only 15, but she told the judge she was 16.

"When we got married and my uncle found out, he said, 'It will never last. No way will it last!' But it did!" she said.

"It was a done deed," Ralph said. "We got along great after that."

The two built their first house together, and then jointly designed each one after that. Ralph built their current home to make Mimi more comfortable after she became wheelchair bound some years ago after suffering a stroke.

Doctors diagnosed Ralph last year with pancreatic cancer. "I was supposed to die, but I'm still alive," he said. The two set goals for the next big "date."

"The next one is his birthday in February. He'll be 93," Mimi said. "I guess the good Lord isn't ready for us yet. So here we are."

The two are very outspoken about what has helped them stay together through the Depression and all that followed in the past 71 years.

"Patience and a sense of humor," Mimi said. "Without those, we would have been lost."

"We did everything together," Ralph said, "No matter what happened, we worked it out. We had some tough times, and some awful good times. It's a lot of give and take."

Mimi, the self-proclaimed "cockeyed optimist" of the family, said the good times always outweighed the bad. She said Ralph never forgets an anniversary or birthday, and she does the same for him, making cards for him on her computer.

"Neither one of us ever thought about divorce. But murder - many times, many times! It wasn't all sweet roses," Mimi said, laughing.

Most married couples have to work through money issues, and the Meixners learned their financial lessons during the Depression. Ralph said he had to work "awful hard" as a construction superintendent and Mimi learned to manage, so much so that she still carefully considers price when she shops. She worked in medical records, and saved a bit from each paycheck, enough to help the couple get a new start when they retired and moved to Arizona 24 years ago.

Ralph has a bit of hard-earned advice for married couples.

"We never bought anything we couldn't pay for. We never went into debt. If we wanted it, we earned it, or forgot it," he said.

Ralph gets tongue-tied when he tries to describe his feelings for his bride of 71 years. "She keeps me happy. It's hard to explain why I love that girl, I love her with all my heart. We were just meant to be, that's all I can say."

Ralph and Mimi Meixner celebrate 71 years of marriage
Love is ini the air ... still
Marriage is hard work ­ but worth it
Valentine's Day: it's what you make it
Celebrating marriage, faith and commitment