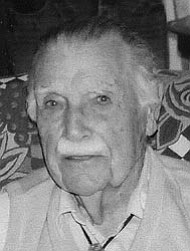 Dr. Cotts, "Doc" to his friends, came to Arizona in 1928 from his birthplace, Madison, Kan., two days before his 21st birthday. He married Sally E. Gunn on June 14, 1930, at the Phoenix Christian Church. They were to celebrate their 60th wedding anniversary the next week when he lost the love of his life in 1990.

Doc and Sally were well known in Glendale, with their residence and his chiropractic/naturpathic office on the corner of 57th and Glenn drives. They shared their love of ballroom dancing with over 300 seventh- and eighth-graders throughout the Valley. Sally taught with Doc assisting. Friday nights found them square dancing at different venues; Saturday night was ballroom dancing at the Scoits in Phoenix.

In the late 1940s, they bought property in the Prescott area and later were among the first group of square dancers on the square downtown on Saturday nights. Both Doc and Sally were "callers"; Sally's specialty was "Red River Valley" and Doc patten called.

Doc was on the Glendale City Council in the late '40s. He also spent many hours helping Sally with a Glendale Women's Club project, Thunderbird Park. His and many of his friends' winter weekends were spent pruning trees, moving dirt and building ramadas at the park "way out" at the end of 59th Avenue.

Doc retired to Groom Creek, south of Prescott, in 1977 at 70 and lived recently in Mayer. He spent a lot of his time the last few years traveling around the world, riding an exercise bike and going to the movies.

He liked to go out on Friday nights to the Pine Cone Inn in Prescott and just quit dancing the last couple of years.

"We believe Dad will be remembered for his sense of humor and his moral standards," Paul and Sandra said. "He often said 'a man is only as good as his word' and he lived that.

Doc's seven rules for life were 'stay active, moderation in all things, make haste slowly - don't push, live one day at a time, love and be loved, do your best to follow the Golden Rule and, if you have problems, talk it over with the man upstairs.'"

A Day to Remember Poppa was with his immediate family. In lieu of flowers, the family requests Doc be remembered by donating to a charity of your choice in his name.