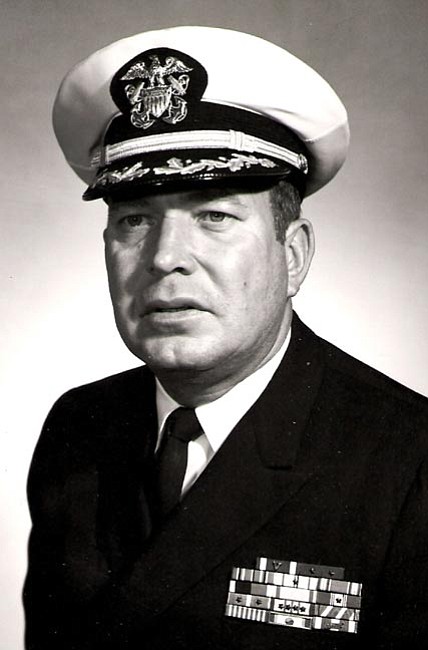 Commander Robert Lee Hughes, Sr. (USN Ret.) passed away in his home in Prescott, Ariz., on Jan. 20, 2008, after fighting a courageous battle with Parkinson's disease and leukemia. He was born Jan. 14, 1927, in Covington, Ky.

Young and ambitious, Robert tried to join the U.S. Navy at 15 years old. Upon discovery of his age, he was told he couldn't enlist "until he was of age..." With his determined nature, he promptly enlisted once he turned 17.

Robert's first duty station was in New Guinea. He then served on several aircraft carriers and was promoted to Chief Petty Officer. He then became a "Mustang" (an enlisted man that becomes an officer) when he was appointed to the rank of Ensign. In July 1959, he made Lieutenant aboard the USS Dutton. In 1962, he served as Material Officer and Executive Officer at the U.S. Naval Facility, Antigua, U.S. Virgin Islands. While serving in Vietnam, he was awarded the Bronze Star Medal for heroism, the Vietnam Service Medal with bronze star and recognition for his outstanding contribution to the Vietnamese communications program. At the rank of Lieutenant Commander, he was also commended for his work as Chief Liaison Officer for USASTRATCOM-EUR, where, in 1974, after 30 years of service, he retired as a U.S. Navy Commander. Robert's last duty station was as Commander of the Fleet Anti-Submarine Warfare Center, San Diego.

Retired Commander Hughes, his wife, Josephine (Meadie), and their four sons made San Diego their home. Josephine passed away in 1981 after 33 years of marriage.

Robert and Nancy (Heinrichs) met in San Diego and married. In 1994, they moved to Prescott, Ariz., where he pursued his latest pastime with his wife at his side - golf. He was an avid sports fan, and being from Kentucky, he naturally loved horses and horseracing. Robert L. Hughes will always be remembered as an "Officer who served his country honorably and a Gentleman from Kentucky."

He is survived by his wife of 25 years, Nancy; three of his four sons (with Josephine) and their wives. They are Michael (Jackie), Jeffrey (Cindy) and Robert, Jr. (Rose). Robert enjoyed four grandchildren, Crystal, Joanie, Nicole and Robert. He is also survived by brothers and sisters, John, Biby, Helen and Jim. He will also be missed by he devoted beagle, Barney.

Hampton Funeral Home has made arrangements for a full military funeral in Arlington National Cemetery, Arlington, Va. In lieu of flowers, his family requests memorials contributions be made to Hospice Family Care in Prescott, Ariz.