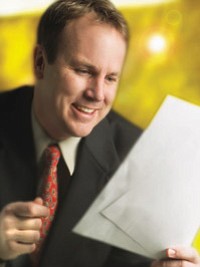 For the 110 attendees at the Prescott Valley Chamber of Commerce's quarterly breakfast Tuesday, the mood was one of optimism, even in a nationwide economic downturn.

Sanford Cohen, owner of Yavapai Broadcasting and the breakfast's sponsor, related how he opened his first radio station by situating an antenna on a telephone pole next to his studio. Years later, he started the U.S.'s first solar-powered radion station, and recently, opened two new stations.

"Let's admit the economy is really soft. What can we do about it?" he said. "There's business out there, just less of it. We need to be more competitive and generate sales."

Marnie Uhl, Prescott Valley Chamber of Commerce president and CEO, agreed, calling the economy slow and soft. "Everybody needs to pull together and make things happen," she said.

"Growth is slowed but not stalled," she said, citing new construction, business expansion and Chamber programs. "Prescott Valley is moving forward and has exciting things happening."

"Our 30th anniversary will be the most dynamic and exciting year Prescott Valley has ever seen," Skoog said.

Skoog called the nation's economic surge from the 1950s up "dramatic" and in the '90s "almost wild," explaining why the housing "meltdown" has such an impact now, despite new commercial expansion.

He praised Town Manager Larry Tarkowski for increasing the Town's reserve to its present $21 million, and for taking steps to "keep us strong and solvent."

Greg Fister, economic development director for the Town of Prescott Valley, said things weren't as bad in '07 as people perceived, and "not everything is about houses, thank God." He enumerated activity increases in '07 and upcoming business openings for '08. (See followup story in Friday's Tribune.)

Economic Development Foundation Director Gary Marks said town leaders are "looking on the bright side," but people must be patient.

"If we back up three to four years, we see that the things that are happening now were started then," Marks said. "We probably won't see the full ramifications until 2010 or '11. We don't look at 1-year plans, but at 5-year economic development and strategic marketing plans."

The crowd applauded when Bill Feldmeier, ADOT board member, said, "The economy may be soft but the enthusiasm is certainly high in Prescott Valley."

Dane Beck, whose Beck Legacy Group is building the Hampton Inn & Suites, explained how the hospitality industry will increase downtown business and keep dollars in town.

"It's an opportunity for guests to park and walk to restaurants and stores," he said.

Cunningham said besides economics, a team has an emotional impact on its fans. Moore promised success, saying, "I will win a ring."