Retired attorney has lifetime of achievements 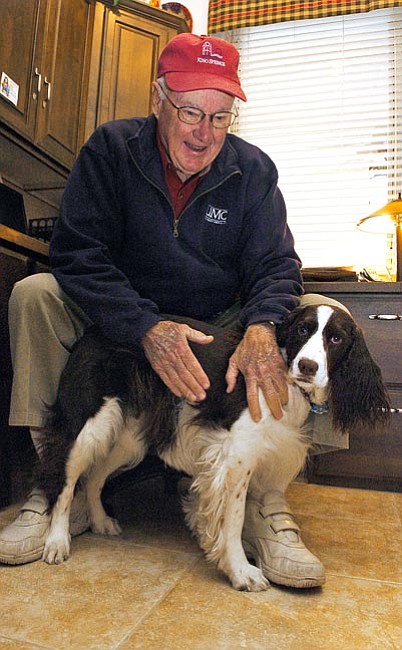 PRESCOTT VALLEY - Retiree Doug Wall, 80, had a distinguished career as an attorney, and continues his involvement on state civic boards.

"I have to keep doing something," said Wall, who retired from his law practice in 1993 while continuing to hold his license to practice law.

Wall, a native of Iola, Kan., said that he became an attorney by accident. He earned a bachelor's degree in physical education from the University of Kansas, and landed a job in Bartlesville, Okla., as a swimming coach for Phillips Petroleum.

He recalls a locker room employee at Phillips Petroleum telling him, "Mr. Wall, you need to do more with your life."

Wall returned to the University of Kansas, where he graduated from law school in 1953. He coached the swim team for two years.

His law degree took him in 1955 to Phoenix, where he worked for the trust department at Valley Bank. Two years later, the bank moved him to Flagstaff to head its Northern Arizona trust department.

Wall left the bank a year later to join a law firm with two other attorneys in Flagstaff. He handled some trial work in personal injury cases.

He also represented Richard Wilson, nephew of General Motors Chairman Charlie Wilson, by fighting plans in the 1970s from a Texas developer for building homes on the San Francisco Peaks near the Snowbowl ski resort. Wilson was concerned about the water supply, he said.

Wall also taught business law for 20 years at Northern Arizona University, and served as the attorney for NAU.

Even before retiring, Wall devoted time to civic life. He negotiated land purchases that led to the founding of Prescott College. He also negotiated agreements that brought Embry-Riddle Aeronautical University to Prescott.

"He deserves acknowledgement as a tremendous leader and an achiever who has impacted thousands - millions - of persons who live in Arizona," Ray Newton, a Prescott resident who is retired from teaching journalism at NAU, stated in an e-mail.

Wall and his wife of 16 years, Marilyn, moved to Prescott Valley four-and-a-half years ago. The Walls share a home in the StoneRidge subdivision with Molly, an English springer spaniel.