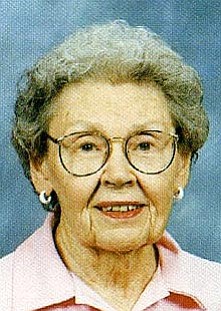 She graduated from Corvallis High School in Corvallis, Ore., in 1936. After a year at Oregon State College, she transferred to the University of Washington in Seattle, graduating in 1943 with a B.A. in General Literature.

After graduation, she worked at Radio Station KIRO in Seattle, first in the Music Library and then in the Operations Department. Two years later, she moved to San Francisco where she worked in the Music Library at Radio Station KSFO. She went to New York City in 1948 and worked for CBS in the Radio Network Operations Department before becoming Operations Manager for WCBS-TV. In 1962, she moved to Denver, Colo., and went back to school where she got her M.L.S. from the University of Denver. She worked at the Denver Public Library until her retirement in 1985. She moved to Prescott in 1993. Her sister, Helen, and a friend from her New York and Denver days, Eve Lee, joined her in 1962.

While living in New York City, she enjoyed the musical and cultural life of the city, singing in Robert Shaw's Collegiate Choral as well as the choir at Fifth Avenue Presbyterian Church. In Denver, she continued to enjoy choral singing in the Westminster Choir of Montview Boulevard Presbyterian Church, touring and singing with them in the cathedrals of Europe in 1985. She also enjoyed hiking in Rocky Mountain National Park and taking a raft trip on the Green River. She loved to travel, especially by cruise ship in later years. She enjoyed playing bridge as well as watching various spectator sports. After coming to Prescott, she sang in the Trinity Presbyterian Church choir, did volunteer work in the church library and volunteer work for People Who Care.

She is survived by many friends. Her sister, Helen, preceded her in death in 2005.