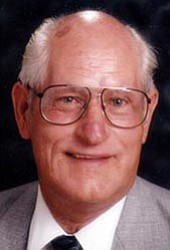 George Franklin Simpson, 73, entered into the gates of Heaven on Saturday, Dec. 29, 2007, after a courageous battle with Lou Gehrig's disease (ALS). He was born March 2, 1934, in Ainsworth, Iowa, to William Laird and Bonnie Simpson.

He was a plumber and pipe-fitter by trade and also a businessman in Prescott for many years.

George became a Christian in 1973 and was a member of the Potters House Church.

George was a loving and compassionate husband, father, grandfather, great-grandfather and friend. He will be greatly missed.

He is survived by his daughters and sons-in-law Vickie and Chris Wendt of Coeur d'Alene, Idaho; Becky and Steve Brazell of Tucson, Ariz.; daughter Robin Simpson of Prescott Valley, Ariz.; and son and daughter-in-law Dwaine and Vicky Simpson of Chino Valley, Ariz. He is also survived by a granddaughter and her husband, Joelle and Roger Geissinger of Post Falls, Idaho; granddaughters Cheyene Simpson of Chino Valley and Dannae Brazell of Tucson; grandsons and their wives Aaron and Sarah Wendt of Spokane, Wash., and Jeffrey and Jennifer Wendt of Coeur d'Alene, Idaho; grandsons Nathan Brazell of Peoria, Ariz., and Jeremy Brazell and Joshua Brazell of Prescott Valley, Ariz.; great-granddaughters Raigan Wendt of Spokane, and Karissa and Kelsie Geissinger of Post Falls; and great-grandsons Caden Wendt of Spokane and Tyler Wendt of Coeur d'Alene. He is also survived by his sisters, Edith Simpson of Davenport, Iowa, and Judy Fulton of Columbus Junction, Iowa; and brothers Ray Simpson of Blue Grass, Iowa, John Simpson of Roscoe, Ill., Andy Simpson of Ainsworth, Iowa, Larry Simpson of Ottumwa, Iowa, Ronnie Simpson of Wentzville, Mo., and Joe Simpson of Davenport, Iowa. He is survived by numerous nieces and nephews and friends. He was preceded in death by his parents, two brothers, one sister and his wife Marlene of 34 years.

A memorial service to honor his life will be 11 a.m. Saturday, Jan. 5, 2008, at the Potters House Christian Church, 5195 N. Highway 89 in Prescott, with Pastor Greg Mitchell officiating.

The family suggests either flowers or a donation to the ALS Association, Arizona Chapter, 4643 E Thomas Road, Suite 1, Phoenix, AZ 85018 in memory of George.