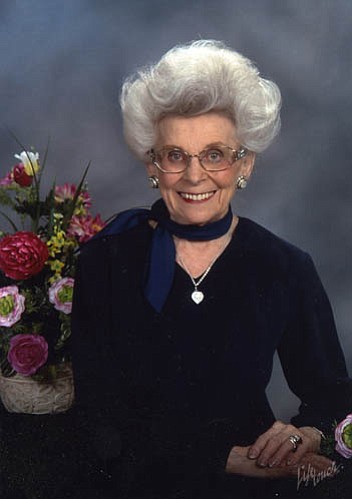 Alma Jo Elrod Stevens Minucci went to be with her Heavenly Father on Dec. 31, 2007. Alma Jo was born July 4, 1924, in Prescott, Ariz., to Charles and Leone (Harvey) Elrod. She lived in Prescott all of her life except for a few years during World War II when she traveled with her dad to Texas.

She went to Lincoln Elementary School as a child. She was crowned with the honor of Prescott High School's first Homecoming Queen in 1941 and went on to graduate the following year from Prescott High School. After graduation, she attended nursing school at St. Joseph School of Nursing in Phoenix, Ariz. Alma Jo was married to Olen Stevens in 1943. (He preceded her in death in 1980.) Together they had three children, Sharon Peterson (Charles) of Phoenix, Ariz., Janice Goodwin (Bob) of Phoenix, Ariz., and Teri Tatum (Jim) of Prescott. She is also survived by six grandchildren, Bryan Peterson (Tiffany Houston) of Phoenix, Deanne Goodwin Laurvick (Chuck) of California, Steve Peterson (Michelle) of Phoenix, Jamie Tatum Vinton (Jake) of Prescott, Jake Tatum of Texas and J.T. Tatum of Prescott; and two great-grandchildren, Scott Peterson of Colorado and Andreana Laurvick of California.

In 1996, Walt Minnuci was added to her family when they were married. Her family was the love and the joy of her life.

She was a member of the Unity Church of Prescott. She spent many years volunteering for the Prescott Chamber of Commerce. She enjoyed meeting new people and sharing with them her love and history of her hometown. Part of the culture of Prescott she enjoyed the most was Smoki. It took front and center in her life for many years growing up, with her dad as a charter member and her mother as the first chieftess. She continued to raise her family with all the festivities that Smoki held and continued in her later years to collect and preserve its history.

P.E.O. Chapter O also held her heart. She was an active member for 48 years. Mom was a charter member of the Sew and So club and a member of Prescott Outings club. She sat on the board of the Prescott Samaritan Village for many years. During the '80s, she helped at the Adult Center, sharing with them many talents, especially her love for big band music and ballroom dancing. Mom will be forever remembered for all the many reunions that she helped put on for Prescott High School. The Pearl Harbor Class of '42, as they were nicknamed, is very close. They desired to stay in touch and she spent many hours making sure that happened.

Her family would like to thank the loving caregivers at Las Fuentes Assisted Living, where she spent the last year of her life. They were truly God's angels! Also, a special thanks to the Yavapai Regional Medical Center Hospice. Your love and support will be remembered forever. Thank you. She passed quietly in her sleep early in the morning of Dec. 31, 2007. She was holding one of her favorite stuffed toy animals as she entered the gates of Heaven.

A celebration of life will be 11 a.m. Friday, Jan. 4, 2008, at Arizona Ruffner Wakelin Funeral Home, with burial to follow at 2 p.m. at Mountain View Cemetery. The family asks that in lieu of flowers, donations be made to either the YRMC Hospice - Restricted Fund, 3262 N. Windsong Drive, Prescott Valley, AZ 86312, or The Unity Church of Prescott, 145 S. Arizona, Prescott, AZ 86303.

You are invited to sing Alma Jo's guestbook and view a tribute to her at www.Ruffner.wakelin.com.