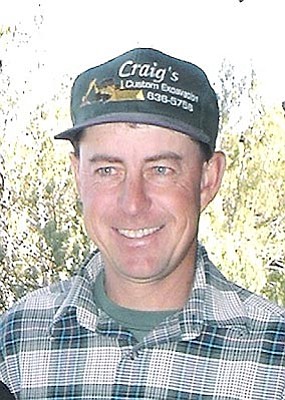 Craig Steven Blunk, 40, of Chino Valley, Ariz., was taken unexpectedly from our lives on Tuesday, February 26, 2008, at his residence.

Craig was born Feb. 6, 1968, in Ottawa, Ill., and moved to Prescott with his family in 1971. Craig graduated from Prescott High School in 1987 where he was a member of the wrestling team. Craig owned and operated Craig's Custom Excavation.

One of his greatest loves has always been the outdoors and animals. His entire life he enjoyed riding his horse, his Rhino, fishing, hunting and spending time with his children. He enjoyed his work as much as anything. He always seemed the happiest while working his backhoe. Craig loved being in the Demolition Derby at the county fairgrounds and spending hours working on his derby car.

The mold was broken when Craig was born. He was one of a kind. He and one of his childhood friends rode their unicycles in the July 4 parade without even registering.

He is survived by his mother and stepfather, Rozanne and Lloyd Love of Prescott; his father Richard of Las Vegas, Nev.; his sister Kellie Ziglar (Dave) and their children Kaitlyn and Jake of Gilbert, Ariz.; stepsister Tania Love of Fair Oaks, Calif.; stepbrother Kevin Love (Teri) and their children Joseph, Cayna, Bethanie and John of Henderson, Nev. He is also survived by his daughter Riley of Prescott; his son Tanner of Seligman; stepdaughter Bailey Hughes, his grandmother Jane Blunk Huntington of Coronado, Calif.; and numerous aunts, uncles and cousins. His Uncle Kit preceded him in death in 2001.

The family has set up a memorial fund for the benefit of Craig's children at Country bank, 107 E. Willis St., Prescott, Ariz. A memorial service will be 11 a.m., Monday, March 3, at the American Lutheran Church, 1085 Scott Drive, Prescott, Ariz.