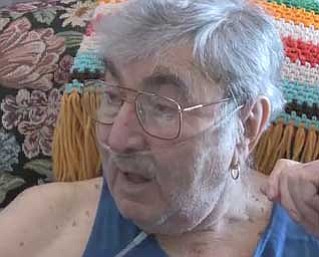 In this video by former Courier online editor John P. Kamin, Zelnick - famous in his own right - shares a few personal memories of his life with the King of Swing. This video and the story below were produced in May 2007.

When he was 9 years old, at the outset of the hot and humid summer months in early-1930s New York City, Mel Zelnick strolled down the avenues sensing an unfamiliar buzz in the air.

Footloose and carefree, Zelnick wore a necklace of camfur, undoubtedly a nuisance for an adventuresome boy, but nonetheless a lifesaver doctors had employed to help prevent patient paralysis from polio.

Little did Zelnick know as an underprivileged youth from the Bronx, that he would be spared from polio’s crippling clutches and traverse a high road to stardom as one of the most famous jazz drummers of all time.

Zelnick, whose name is listed in several jazz encyclopedias, gained much of his notoriety as a one-time band member of jazz icon Benny Goodman in the early 1950s, and later as a recording artist for Capitol Records. But it was on those bustling city streets in New York that Zelnick, who never had formal drum lessons, got his start with a group of inexperienced youngsters in a neighborhood drum corps who were learning how to perform a basic roll.

“I was playing along the streets, and I saw a bunch of kids sitting on the sidewalk and they had drum sticks in their hands,” said the 82-year-old Zelnick, recalling his capstone childhood moment this past week from the living room of his rural home. “I looked at them, and it looked pretty easy what they were doing, so I said, ‘That doesn’t look too difficult.’

“They were having trouble. They were stumbling,” he continued. “They looked at me and they said, ‘Yeah, you think you can do it?’ So they gave me the sticks, and I said, ‘Just show me how to hold it.’ They showed me, and in two minutes I brought it into a roll. They could not believe it, and I could not believe it myself. It was so easy for me to do that.”

In the following two weeks, Zelnick learned the 26 basic rudiments for drumming, and he soon metamorphosed into his community center drum corps’ top drummer.

Zelnick said he learned the most about percussion from watching and listening to late jazz drumming legends Buddy Rich, Chick Webb and Gene Krupa during his childhood.

In the early 1930s, Zelnick’s older brother took him to New York’s Apollo Theater to see Chick Webb’s Orchestra, which was showcasing the singing of African-American jazz vocalist Ella Fitzgerald, a 13-time Grammy Award winner who passed away in 1996.

“I watched Chick play, and I looked at my brother and I said, ‘That’s what I want to do. I want to be a drummer and I want to play in a jazz band,’” Zelnick said.

Three years later, at age 12, while in his grade school’s marching band, Zelnick received his first snare drum free of charge and entered a contest where he won the city championship for individual drumming.

Zelnick’s talent and drive eventually led him on stints as a drummer for the U.S. Army Band during World War II, Goodman in the 1950s, and famous Capitol Records studio artists, such as Peggy Lee in the 1960s. He’s also shared the stage with greats such as Charlie Parker, Wardell Gray, Stan Getz, Ray Charles, Dizzy Gillespie, Stan Hasselgard, and more. The legendary said Gray and Getz were the two best tenor saxophone players he ever played with.

Today, Zelnick, who has undergone invasive heart bypass surgery and needs an oxygen tank to breathe efficiently, lives in a modest two-story home several miles outside of Spring Valley, a small community east of Mayer, with his wife, Bobbie.

The couple has resided in this reclusive rural area for several years, but Zelnick, a sharp and witty man, has not forgotten his musical roots back East.

Although he shows telltale signs of fatigue, Zelnick has held onto his passion for playing.

Occasionally Zelnick will practice on a kit he keeps in the cramped upstairs loft of his home, even though he has to tote his oxygen tank upstairs, in order to drum.

While it’s clear that Zelnick’s health problems have slowed him, the rhythm and electric style of his playing have not succumbed to such constraints.

Zelnick’s vigor from his childhood lives on in a man whose music has sustained him throughout a once magical career.