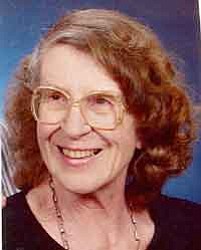 Evelyn Elaine Healey, 80, a resident of Davenport Lutheran Home, formerly of Edgington, Ill., was called home to be with the Lord on Sunday, Feb. 17, 2008. Per her request, cremation rites were accorded. The Runge Mortuary is assisting the family with arrangements.

Evelyn was born April 25, 1927, in Moline, Ill., the daughter of Clarence and Ruth (Schell) Johnson. She was united in marriage to Edward J Healey on April 20, 1946; he preceded her in death on March 18, 1996. They enjoyed many years together in retirement in Prescott, Ariz., sharing 50 years of marriage.

She was a homemaker raising five children and in later years, volunteered for Meals on Wheels and the Yavapai Thrift Shop in Prescott, Ariz.

Those left to honor her memory include her daughters, Dawn Marti and Diana Entsminger, both of Davenport; sons, Daniel, Washington State, Darren and Dwight of Muscatine, Iowa; six grandchildren; five great-grandchildren and one great-great-grandchild that completed a five-generation family. Her husband and a grandson in 1995 preceded her in death.

She will be dearly missed and lovingly remembered by family and friends.