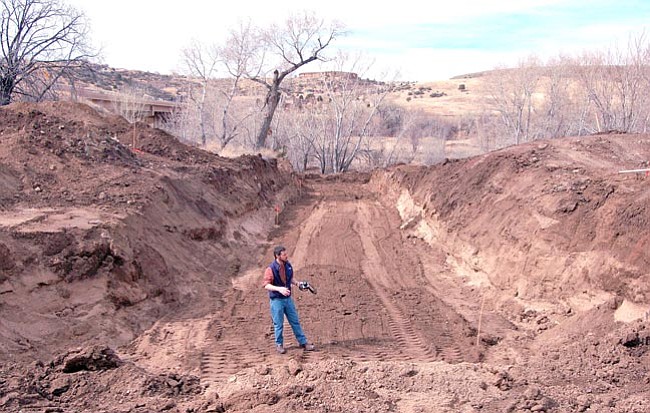 The Daily Courier/Doug Cook<br> Prescott Creeks Executive Director Michael Byrd stands in a manmade ditch where his non-profit group and others, including a crew from the City of Prescott, are reconstructing a storm water basin to better protect the Watson Woods Riparian Preserve from erosion.

PRESCOTT - With heavy storm water runoff creating an ongoing problem in protecting the Watson Woods Riparian Preserve, the Prescott Creeks conservation group is redesigning and rebuilding a failed basin there to improve water quality in Granite Creek and Watson Lake.

To reduce sediment problems and contaminants affiliated with the runoff, Prescott Creeks is laboring alongside the City of Prescott to repair the basin and its outflow channels adjacent to the intersection of Prescott Lakes Parkway and Sundog Ranch Road.

The basin's original construction was not equipped to handle increased storm flows from Prescott Lakes Parkway - which was built in 2000 as a connector road between highways 69 and 89.

As a result, the preserve and the adjacent Peavine Trail have suffered from severe sediment erosion.

At present, any significant rain or snowmelt dumps road contaminants, trash, sediment and other pollutants directly off the parkway and into Granite Creek below.

When the non-profit Prescott Creeks and the city complete the project in April, the reconstructed and vegetated basin and its repaired outflow channels will capture, slow and manage storm water flow away from the Peavine Trail's parking area, through the preserve and into Granite Creek and Watson Lake.

Currently, storm water comes out of a concrete culvert underneath the parkway and straight toward the parking area before meandering around a corner and into the basin.

The new plans call for the basin to fill with water while four 54-inch culverts drain the water and drop it 6 feet down. A smaller culvert will discharge water at an angle to move it closer to the base level of the floodplain.

Water will flow into an ephemeral wetland standing below the culverts. A rock pad will spread out the water and dissipate its energy as it falls.

From there, the water will flow downstream and northward toward Watson Lake through a series of wetlands and controlled channels.

Ann-Marie Benz, watershed program coordinator for Prescott Creeks, said crews will reseed about 4 acres of the downstream end of the basin to help control erosion. They likely will put in native grasses, Cottonwood trees and willow shrubs to soak up pollutants and suspend them there.

"The native riparian vegetation helps to filter the waters, so it will filter a lot of the road runoff," said Benz, who has mainly coordinated efforts with the city.

Brad DeVries, outreach coordinator for Prescott Creeks, said, "One of the reasons of being aggressive about getting in native vegetation and making sure it gets well-established is because other invasive weeds and things do really well, and you don't want those to get established."

Prescott Creeks Executive Director Michael Byrd said his group has been working for two years on the basin's new design.

When the basin is complete, Prescott Creeks wants to move forward with the rest of its restoration work for the preserve, slated to begin in October.

By slowing and filtering contaminants before they reach Granite Creek, Prescott Creeks' goal is to clean up Watson Lake and the creek so the Arizona Department of Environmental Quality can remove them from its list of "impaired waters" and meet the standards of the federal government's Clean Water Act.

"This project is a piece of that puzzle," Byrd said. "We need higher dissolved oxygen in the creek and the lake. We know we have elevated e. Coli levels in all of our creeks, and we want to understand where those things are coming from."

Over the past few weeks, Prescott Creeks, the city, the Arizona Department of Environmental Quality, private design and construction companies, and community volunteers have come together to form a unique partnership to work on the project.

Prescott Creeks is collaborating with the city and Tom Moody of Natural Channel Design, Inc., to redesign the basin so it can adequately handle storm water flows.

"We've got this valley to the east (of the Peavine) that historically we believe the drainage used to come down out of and travel diagonally across the basin area to where the bridge is on the Peavine Trail. Then the drainage would discharge into the lake," he said. "But as the area has gotten developed over time, all the drainage patterns have gotten shifted around."

Initially, Byrd said, his group considered opening up the basin and letting the water flow straight into Granite Creek, but that would have posed too many problems for the creek and the structural stability of the parkway.

"We decided we didn't want to do that because it loses a lot of elevation here. When water moves quickly, it's doing work and picking up sediment," he said. "From the end of the outflow pipes to the floodplain level of Granite Creek, there's about a 16-foot difference. All that water coming out of there has a lot of turbulence and it was washing all the material away into the creek."

In addition to improved water quality, the project will bolster the health of riparian habitats at the preserve and feature interpretive signage for hikers and joggers on the Peavine Trail.

Eventually, a restroom will go in at the trail's opening off Sundog Ranch Road.

To pay for the project, Prescott Creeks competed for and received a Water Quality Improvement Grant from the Arizona Department of Environmental Quality, which will bring in $217,918 in construction and monitoring work to the community.

"It's about $100,000 for this project, and we had to match that at 40 percent," Byrd said. "So we have volunteer labor that's matching and the city making contributions that's also matching."