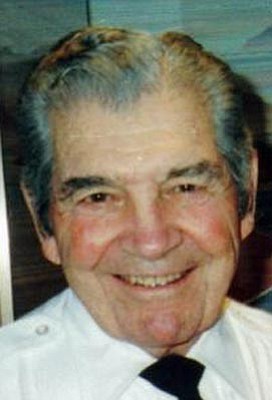 During his early years, his family spent time in various mining towns around Arizona before settling at 16th Street and Yale in Phoenix.

Ed attended St. Mary's Grade School and graduated from Phoenix Union High School in 1939. He married Veda Huish in 1942, and they were married for 60 years before her death in 2002. He was a B29 navigator in the Pacific during WWII. He was with Standard Oil for 45 years, retiring in 1982. He moved from Phoenix to Prescott in 1996.

He enjoyed hunting with his son and grandsons and being active. He was a member of the Yavapai County Sheriff's Office Volunteers in Protection, a life member of BPOE, and was a volunteer for Meals on Wheels.

Ed was on his high school reunion committee, which met regularly, as well as Chevron Retirees Association. He and Virginia, both having lost spouses to Alzheimer's, were very active in the Alzheimer's Association in Prescott. Every Friday night you could find him dancing with Virginia at the American Legion in Chino Valley.

The family will host a gathering of friends in celebration of Ed's life at the Yavapai Co. Mounted Sheriff's Posse House, 1495 Sheriffs Posse Trail, Prescott, AZ 86303, on Saturday, March 1, 2008, from noon to 4 p.m.

In lieu of flowers, donations may be made in Ed's memory to the Northern Arizona Chapter of the Alzheimer's Association, 225 Grove Ave., Suite B, Prescott, AZ 86301.