Column: The NHL's own identity crisis 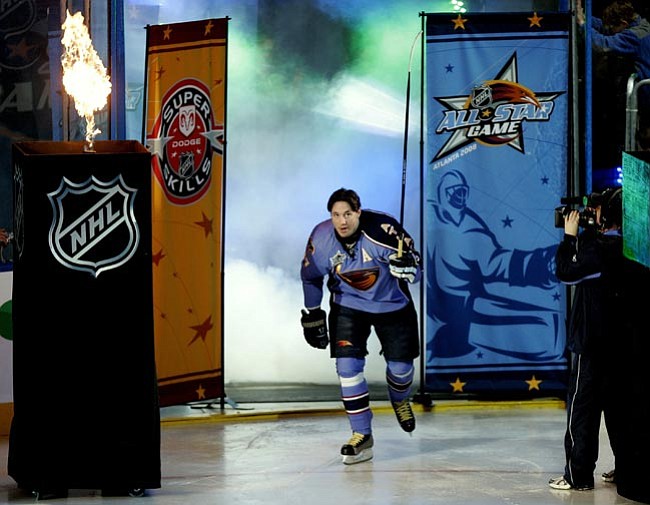 The Associated Press/<br>John Bazemore<br>The NHL showed itself off at the All-Star Game, featuring the Eastern Conference's Ilya Kovalchuk, Jan. 26 in Atlanta, but the league is far from competing among the top tier sports leagues.

Originally Published: February 1, 2008 12:44 p.m.
Tweet
Contrary to the opinion of the suits at NHL headquarters, the National Hockey League is a Tier II sport. Which wouldn't be so bad, except the league is still operating as if it were on a par with the NFL, the NBA, and MLB.For the record, I'm not trying to dis the NHL. In this corner, the game of hockey, when played without the lawlessness that has become all too prevalent in the NHL, is the second best sport in the world. But in the U.S., hockey is not on a par with the Tier I sports of football, basketball and baseball, certainly not in terms of media revenue, the most important ingredient in the success of a sports league in the 21st century.After emerging from a lockout that wiped out the 2004-05 season, the NHL signed a three-year, $200 million national broadcast deal with Versus, the former Outdoor Life Network owned by Comcast. Versus acquired the NHL as the first step in an ambitious effort by Comcast to build a cable network to rival ESPN.In addition to the NHL, Versus sought to acquire NFL games, which they ultimately lost to the NFL's own network, and MLB games that have since gone to TBS. Had they acquired those two additional properties, Versus would have been in demand by every cable and satellite operator in the country.But the demand never materialized for a network that, in addition to the NHL, carries the National Lacrosse League, the World Combat League, and the Tour de France. By industry estimates, Versus can be seen in only 71 million homes, far below the 100 million homes that have access to ESPN and ESPN2.The deal with Versus infuriated ESPN, which had insisted on a revenue sharing arrangement with the NHL similar to the one the league signed with NBC. As the cable carrier of the NHL in the years leading up to the lockout, ESPN had spent millions of dollars and countless hours of airtime promoting the league when other networks had no interest in the product.Ever since the NHL turned its back on ESPN, there have been rumors that a return engagement would take place at the expiration of the contract with Versus. For that to happen, the NHL has to act like a Tier II sport. ESPN doesn't need the NHL, like they do the NFL, the NBA and MLB. ESPN can fill their programming time with such sports as Major League Soccer, NASCAR's Busch Series, and the Arena Football League, sports that are all too happy to accept the marketing and promotional muscle of the World Wide Leader.But instead of reconciling with ESPN, the NHL recently announced a three-year extension of their agreement with Versus. The extension will reportedly pay each NHL club $2.4 million per year in national TV revenue, up slightly from the $2.1 million per club in the first year of the original deal. Those figures pale in comparison to the Tier I team sports - approximately $96 million per NFL club, $25 million per NBA team, and $22 million per MLB team.There are some good things happening in the NHL. Annual revenues have risen from $2.1 to a projected $2.5 billion in the three years since the lockout, still a far cry from the $6 billion-plus figures announced by the NFL and MLB. The salary cap obtained by virtue of the lockout, while not a panacea for all clubs, allows more teams to operate profitably - and competitively - than was the case in the seasons leading up to the lockout.And last weekend at the All-Star Game in Atlanta, the NHL announced that the 2008-09 season will open in Stockholm and Prague - after opening this season in London - providing more international exposure for a league in need of all the exposure it can get.But on this side of the pond, viewers will continue to have trouble finding NHL games on their TV dial for an additional three years, not a good sign for a league that fancies itself among the Tier I professional sports leagues. Like it or not, the NHL resembles MLS more then MLB. They just don't realize it.(Jordan Kobritz is a former attorney, CPA, and Minor League Baseball team owner. He is an Assistant Professor of Sport Management at Eastern New Mexico University and teaches the Business of Sports at the University of Wyoming. Jordan can be reached at jkobritz@mindspring.com)
Contact
Sign up for Courier e-News Alerts
Most Read
7 days
30 days

Column: NFL Network means big bucks - for those who can see it
Column: Would you pay $36 per month for ESPN?
Column: MLB plans on doubling TV revenue
NFL on the loose through the airwaves
Kobritz Column: More rights coming to TV sports viewers