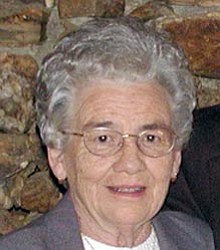 Marian was born on Oct. 8, 1921 in Litchfield, Ill. to Bert and Adala Arnold. She moved to Flagstaff, Ariz. with her husband Harlow and daughter, Karen, in 1952 before moving to Phoenix shortly thereafter. It was in Phoenix that her son, Lon, was born. The family moved to Prescott in 1961.

She loved playing bridge with her friends at her home in Las Fuentes Resort Village, cross-stitch, cooking and her family.

Marian had worked in real estate in Phoenix and, upon moving to Prescott, worked for Lytle and Bell Insurance before moving to Yavapai Savings and Loan, where she reached the title of Vice-President before retiring in 1983.

She is survived by her daughter Karen Yaeger Vorhies and husband Kent Vorhies of San Bernardino, Calif.; son, Harlow III (Lon) and wife Tammie of Paradise, Texas; grandson, Harlow IV, a student at the University of Texas at Austin; and brother Bert Arnold of Litchfield, Ill.

She was preceded in death by her husband of over fifty years, Harlow, who passed away in December of 2003.

A small memorial service will be at 2 p.m. Friday, Jan. 2, 2009 at the Las Fuentes Resort Village, Level One Lounge.

Just coincidence that she passed away on the birthday of our Lord and Savior? We think not.