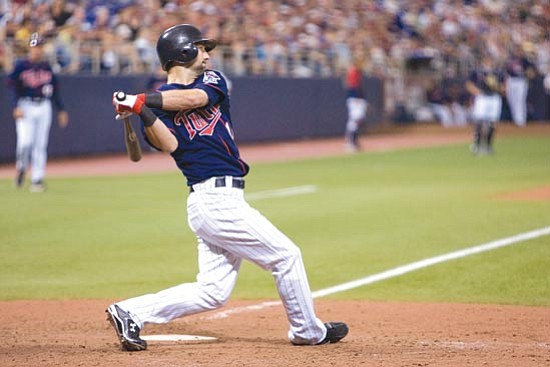 Minnesota Twins/<br>Courtesy<br>After a stellar high school career and solid minor league career, Jason Pridie got the call every baseball player dreams about when the Minnesota Twins gave him a big league roster spot this past September.

To say baseball isn't big in this town is to say you're from out of town. History shows us otherwise.

One of the earliest recorded baseball games - ever - took place in Prescott when the Boston Red Stockings (the future Atlanta Braves) and the Whipple Base Ball Club met for an exhibition on the site that now houses the courthouse plaza in 1876. The town's Little League charter is Arizona's oldest at over 50 years. The high school baseball team dates back to the Forties when Warren Spahn ruled, and the college baseball team has won three national championships. You might say that a regularly scheduled Wednesday night baseball game wouldn't be Prescott's first rodeo.

But when one of Prescott's own reaches The Show, it's a home run for the town's entire baseball community.

On Sept. 3, Jason Pridie debuted in Major League Baseball, one day after the Minnesota Twins rewarded his solid minor league career with a September call-up, and in a pennant race to boot.

Pridie graduated from Prescott High School in 2002 after he led the varsity program to the school's only baseball state championship. His season was nothing short of epic when he led the state in hitting as the soul of the team's championship grit. In the Badgers' dramatic extra-inning title win over Cactus Shadows at Phoenix Municipal Stadium, Pridie hit the eventual game-winning home run in the ninth inning, made a late defensive gem that saved the game, and got the win on the mound as relief pitcher.

His minor league baseball career took off immediately, when he broke Kirby Puckett's record for single-season hits in the Appalachian League in his first year out of the box. After almost six years, Pridie had earned his shot.

Typically, he immediately factored into the game - an extra-inning loss to Toronto while the Chicago White Sox were bearing down on the Twins' AL Central lead. Manager Ron Gardenhire sent Pridie, whom he'd described as "very talented" back in spring training in March, in to run for Delmon Young as a seventh-inning pinch-runner. Later in the inning, Pridie came around on Joe Mauer's bases-clearing double and scored the tying run. His first at-bat resulted in a walk, but his first defensive opportunity in right field led to a critical error that allowed a ninth-inning run to send the game into extras, eventually won by Toronto 5-4 in 11 innings. By the end of the month, the Twins lost the division to Chicago - by one game.

Pridie is the 12th player with Prescott baseball roots to reach the major leagues since 1974, and the first in six years.