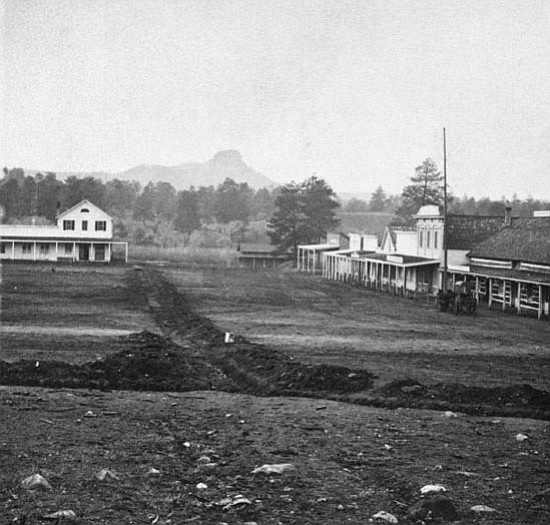 Courtesy/Sharlot Hall Museum<p> Gurley Street in the early 1870s looking west to Thumb Butte. Note the Plaza grounds bordering the street on the left had no fence at this time. H.W. Ward, a squatter, took up residence on the Plaza in 1867, attempting to put up his own house and fence.

A squatter is an individual who settles on property belonging to someone else or to the government. After a certain period of occupancy he may claim the property as his own. In so doing, he is claiming squatters' rights or the right of adverse possession. This two-part article is the story of H.W. Ward, who attempted in 1867 to claim half of the Prescott Plaza as his own by using squatters' rights.

If you've ever thought of squatting on the Prescott Courthouse Plaza, perhaps you should reconsider. It's possible that you could be run out of town. At least that is what we might conclude from a little-known historical event that occurred in Prescott many years ago.

The legal requirements for claiming a tract of land by taking up residence on it vary from state to state, but the laws that govern squatting are, in general, still on the books. In the early days of the United States, squatting was very common. Most of the land in the young nation had not been surveyed, and squatting was a common way of acquiring property. Squatting was later largely supplanted by homesteading throughout the country.

In 1864, John Goodwin, Arizona's first Territorial Governor, decided to locate the new capital in the beautiful valley along Granite Creek. Robert Groom mapped out approximately 320 acres for the new town of Prescott. With great foresight, Groom set aside two 4 1/2-acre tracts within the city for civic purposes. One of these was the Plaza, which is familiar to all of us. The second was a similar-sized tract a block east of the Plaza that was to be the future location of the capital buildings. (The latter area was eventually sold at auction when Prescott lost its designation as territorial capital for the second time.)

In the summer and fall of 1864, town lots were sold to the highest bidders at public auction. The Plaza and Capital rectangles were, of course, not included in the sale.

Two problems arose: The first was that the action of the locally appointed commissioners in subdividing the property and selling lots was technically illegal. These sales did not receive official approval from Congress until eight years later. Second was the simple matter of who actually owned the Plaza and Capital rectangles. Since these properties were apparently still owned by the federal government and had not been sold either legally or illegally, weren't they available to anyone who chose to homestead or squat upon them?

In 1867, a new arrival in town by the name of H.W. Ward saw the loophole and became a squatter on the Plaza. On March 23 of that year, an article in the Arizona Miner entitled "Squatterism in Prescott" reported, "We are sorry to announce the arrival of the notorious vagabond called 'Squatter' in our devoted town. It appears, from some mysterious cause, a party of men, mostly strangers in our country, have deliberately located or 'jumped' our town Plaza, and are now proceeding to stake and fence it, and appropriate the lots to their own private use." This upset the entire community. Citizens were outraged at this usurping of what they thought would someday be a beautiful city center. Merchants with establishments facing the Plaza were particularly incensed. Some action had to be taken quickly.

Part II, next week, will describe what followed.

Ken Edwards is a volunteer in the archives of Sharlot Hall Museum.

Days Past is available on Sharlot.org/archives and via RSS e-mail subscription. Check out Sharlot.org for more information.

HELP! We need your stories and experiences! The public is welcome to submit articles for Days Past consideration. Please contact Ryan Flahive at Sharlot Hall Museum at 445-3122 for more information.