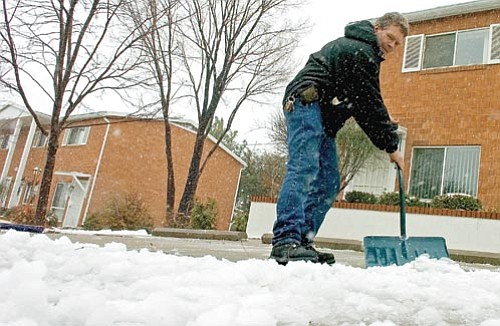 A second Pacific winter storm is due to move into Arizona today, with a forecast for a stronger but warmer system.

That means Prescott is not likely to get any snow accumulation, said Darren McCollum, a meteorologist with the National Weather Service in Flagstaff.

Yavapai County mountains are under a flash flood watch today as the Weather Service predicts the Prescott area could get another 1-2 inches of rain on top of the 1.09 inches northeast Prescott already received by 5 p.m. Tuesday. That was one of the highest precipitation reports in northern Arizona. The average precipitation in Prescott for December is 1.62 inches, with average total snowfall of 4.7 inches.

Snow gathered only in patches within Prescott proper by Tuesday afternoon, although it accumulated some in the mountains to the south. The Weather Service received a report of two inches of snow about 12 miles south of Prescott on the national forest by Tuesday morning.

Higher areas such as Flagstaff reported about a foot of snow from the storm. Roads such as Interstate 40 in the Flagstaff area were treacherous at times.

The Arizona Snowbowl ski area near Flagstaff reported 16 inches of snow by Tuesday afternoon, and it could get another foot, McCollum said. While Snowbowl officials have not said when that ski area might open for the season, the Sunrise Park Resort ski area in the White Mountains plans to open Friday.

None of the Prescott area law enforcement agencies reported any weather-related accidents Monday or Tuesday.

The next storm should move into Arizona Wednesday afternoon through Thursday morning, the Weather Service is forecasting.

It will pull in warm, subtropical moisture from the south so it could produce heavy precipitation at times, McCollum said.

The snow level should be at about 6,500 feet in elevation, versus 5,500 feet with the last storm wave, McCollum said. Downtown Prescott is about a mile high, often right on the cusp of snow versus rain during the winter.

Strong winds could accompany the storm, with gusts as high as 35 mph.

The Weather Service expects unsettled weather to continue through Monday, but with only a slight chance of precipitation.