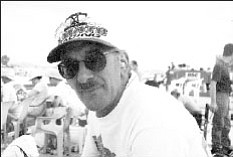 John Arnold Fischer passed into eternal life on Saturday, Dec. 13, 2008, after a courageous battle with cancer.

He was born June 24, 1958, in Estherville, Iowa. After graduation from high school, John served his country in the United States Air Force and was honorably discharged in 1980.

John worked for the Town of Prescott Valley for the past 28 years. He is well known for his backhoe skills and proudly participated in the growth of Prescott Valley, including the construction of Fain Lake, Valley of Lights and the many, many more functions of the Public Works team that we, as residents and visitors of Prescott Valley, only take for granted.

He loved decorating the Town for Christmas and he was right there in spirit as all the lights and decorations were hung this season. John was the Town's longest employee and Prescott Valley recently proclaimed and officially named Fischer Ditch in his honor.

He was an avid NHRA fan, and went to many races in Phoenix, Las Vegas and Pennsylvania, as well as watching the races on television, collecting flags and model cars of his favorites and has a vast collection of hat pins from every event he ever attended. He was also a lifelong Washington Redskins fan. He loved camping and being outdoors, whether exploring, hiking, or riding his three-wheeler. His favorite area in Arizona was Sycamore Canyon and his wish always was to have his ashes scattered there and forever be part of that canyon.

Funeral services will be at 11 a.m. on Thursday, Dec. 18, 2008 at Trinity Lutheran Church, 3950 N. Valorie Drive in Prescott Valley. The family requests that all join us immediately after the service in the Fellowship Hall in order to reminisce and celebrate John's life.