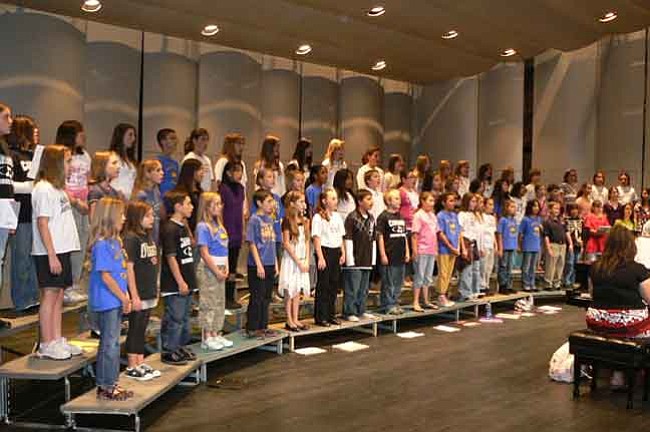 For the fourth straight year, a select group of fifth graders at Territorial Elementary School got to sing in the Cantaremos Fifth and Sixth Grade Honor Choir before 1,200 people in the Gilbert High School Auditorium.

"You get to meet new people and learn lots of things about voice," said Savannah Coffin, an eighth-grader from Heritage Middle School, who sang in this year's Cantaremos Seventh and Eighth Grade Girls Honor Choir. She has now sung in three state honor choirs. "Each year we get a different instructor so we learn different things."

Coffin, who hopes to participate next year in the ninth grade girls honor choir, said she keeps participating because each year is a different experience, and it lets her learn more about music.

Jean Dueppen, TES's music teacher who nominated the singers, said this year the Arizona Chapter of the

Dueppen said each year she listens to see how the students' voices have grown. "I try to pick ones who are responsible, will follow through and be on pitch," she said.

After getting parental approval, each student must turn in an audition tape. Dueppen then selects the students she will nominate from these tapes and sends the ones she selects to the ACDA, which selects members for its four state honor choirs from 300 tapes.

About a month later the ACDA notifies each participating school of the students who its members selected.

For the eight TES fifth-graders, it was their first time to perform before such a large crowd of people.

Ammon Worden said he enjoyed singing in the state honor choir because he likes to sing and "it's lots of fun."

Dueppen notified Hayley Feipel of her selection while she was in a car on her way back from California. "I kept talking to mom about the fun I was going to have," she said.

As to the actual event, Feipel said, "I really enjoyed being able to sing and learn about notes."

"I thought it was exciting to be part of the honor choir because not everyone gets to be in it," Caitlyn Line said.

She added, "I got to learn singing is to have fun and you can learn a lot at the same time."

Montana Williams said she started screaming when notified she was on the state honor choir.

Participating in the event was great, she said, "because I got to do what I like to do: meet new people and learn new musical cues."

Cole Dreischer was very surprised "because it is not every day you get selected for a state honor choir."

"I learned I shouldn't be afraid of singing in front of other people," he said.