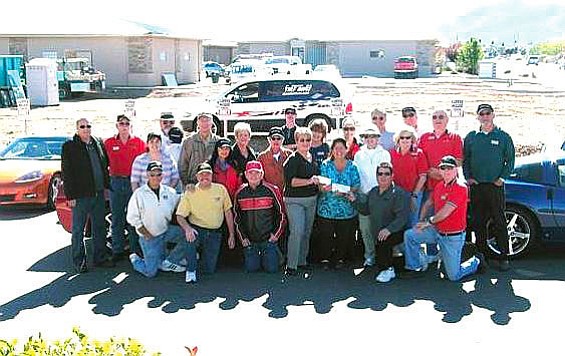 Stepping Stones Agencies was the recipient of the profits in the form of two checks from the Prescott Vette Sette Corvette Club's "Historic All Corvette Car Show" on Sept. 20 at the courthouse plaza. Of the two checks, one was $4,000 from Pat Lynch, president of Prescott Vette Sette, and the second was $800 from Louie Gomez, general manager of Ponderosa Tire Pros.

These charitable contributions will stay in the Prescott area to assist mothers and their children in their most desperate hours, according to a press release. The goal of the Prescott Vette Sette Corvette Club is to support local needs of organizations, such as Stepping Stones, and be an integral part of the community.

The Factory Corporate Sponsor, Lamb Chevrolet helped sponsor this car show event, which drew 164 Corvettes from all over the Southwest and featured all six generations of Corvettes produced over the past 56 years.