Council willing to give up land lease to PUSD 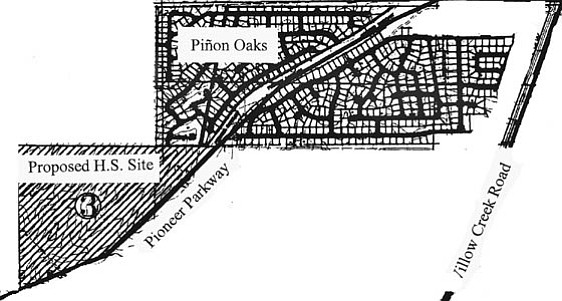 Courtesy<br> The Prescott City Council might give up its lease of Bureau of Land Management property along Pioneer Parkway west of Willow Creek Road to PUSD for a new high school.

PRESCOTT - The Prescott City Council Tuesday afternoon said it is willing to negotiate, but stopped short of agreeing, to relinquish its lease on Bureau of Land Management property west of the Piñon Oaks subdivision Prescott high school campus.

During a joint-session with the Prescott Unified School District Governing Board, the council supported the school district's plan for a new high school, but Mayor Jack Wilson held on to his idea that the city should receive compensation for the approximately 110 acres north of Pioneer Parkway.

The city's BLM land is one of five sites district officials identified as a possible location for a new high school.

Two of the sites are State Trust Land. PUSD Governing Board President Dee Navarro said the district would have to bid against other interested parties to acquire the land.

One parcel belongs to Ron James. He has offered the land to the school district at half its appraised value. The final site is south of Highway 89A and east of Highway 89; however, Navarro said that land was not in a good location.

PUSD board member Steve Campbell said the BLM site is the most appealing, and the district would like to acquire it at a low cost.

"We hope the city will relinquish its lease and let the district to apply to the BLM for a lease," Campbell said.

Wilson asked what the district paid for the Nature Conservatory property, and how much the city paid for the land.

PUSD Superintendent Kevin Kapp said that in 1974 the district bought the land from the Brown family for $10. The district superintendent then gave the corner property - Iron Springs and Williamson Valley - to the city for a fire station.

The city bought the Nature Conservatory property for $1.8 million.

"If the city was charged for the Nature Conservatory, it is going to charge for the BLM land. Quid pro quo," Wilson said.

The difference, district officials said, is that PUSD owned the Nature Conservatory land and the city does not own the BLM land.

"If we purchased the land from the city, what would we purchase?" PUSD board member Tom Staley asked. "We would not be purchasing the land. This is a small portion of the property the city leases from the BLM. We are talking about the same taxpayers."

PUSD board member Joan Fleming asked if it is legal for the city to ask for money for property it does not own.

City Attorney Gary Kidd said the issue is one of property interest; it is contractual. He said the city could also refuse to relinquish the land based on its 25-year lease.

Councilman Jim Lamerson agreed with Staley that the council and governing board serve the same taxpayers.

"As a council we need to say what can we do to help. We need to sit down and talk about it," Lamerson said.

"We did not come here today expecting the council to give us the land. We came to find out if there a sense that the council is willing to relinquish the BLM lease," Campbell said. "If not, then we will have to go elsewhere."

"I think the council is in favor of relinquishing the lease, but we have to look at a dollar figure," Wilson said. "Quid pro quo."

The mayor said it appears that money would change hands, but the two entities should look at joint projects, such as an aquatic center and library.

"I don't think the city will give the land away or that PUSD will pay the appraised value," city manager Steve Norwood said. "We need to meet somewhere in the middle."

Norwood recom-mended that he and Kapp work out a proposal to present to the council and the governing board.

"We want to know whether the city is in the game, and we need to know sooner than later," Newton said.

PUSD will ask city to relinquish BLM lease
PUSD board votes against bond election
Wilson to PUSD: No compensation, no land
PUSD board ready to make tough decisions about new high school
Board works to determine future school locations