In case of emergency, File of Life can be your voice 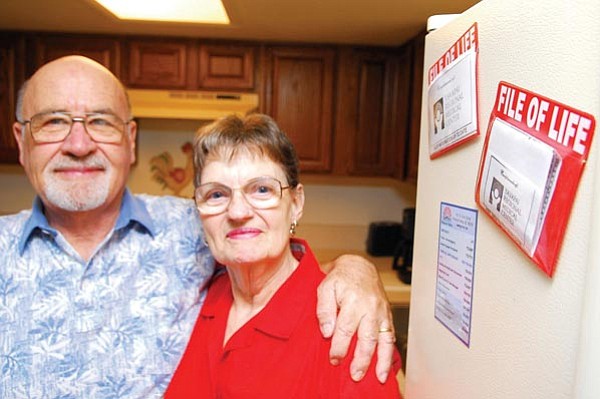 Matt Hinshaw/The Daily Courier<br> Phil Ogle and his wife of 54 years, Shirley, stand next to their refrigerator that has their magnetic File of Life forms on it at their home in Prescott Valley Friday afternoon. The File of Life can be filled out with personal health information in case of emergencies. Phil recently had to use the File of Life when Shirley had a heart attack.

In February, when Phil Ogle's wife Shirley had a heart attack, their house quickly filled with paramedics and firemen, all asking Phil questions about his wife.

Phil was in a panic trying to comfort her and could not remember all of her extensive medical information.

Then he remembered the File of Life hanging on his refrigerator door.

"I just handed it to them," Phil said. "They were able to treat her a lot faster because (that thing was) there."

In a medical emergency, knowing what kind of medicine you take, how much of it and what kind of allergies you have can mean the difference between life and death.

That is why Yavapai Regional Medical Center offers a way to keep such information handy with the File of Life, a free magnetized red plastic pouch containing an information form to fill out with all of your medical information.

Because it has a magnetic strip across the top, you can attach the File of Life to a refrigerator door for easy access.

"Emergency responders are going to be able to scoop that up and go," said Lynnel Walters director of YRMC's volunteer services. They will not have to open any doors or fumble through cupboards. "We know it saves lives," she added.

The hospital has been giving out the File of Life for free for the past eight years. Local emergency responders know to look for it, Walters said.

YRMC volunteers provide free presentations on the File of Life to civic and church groups and local clubs. They'll even attend neighborhood gatherings to hand out the packets and explain their use.

"People love them," Walters said. "It gives so much peace of mind."

Walters said having such information readily available is particularly important for people who live alone.

"This is their voice," Walters said.

Even if you live with someone, it is easy to panic in a crisis and be unable to think clearly or remember everything.

The File of Life eliminates any confusion, Walters said.

File of Life packets come with bright red stickers to affix to your door, window or any prominent place to let emergency responders know to look for it.

The packet also contains a wallet-size plastic pouch with a smaller form to carry in your purse, pocket or car glove box. It is especially handy for joggers or anyone else who exercises regularly and might have a medical problem.

The form inside the packet contains space to list personal and medical information, including any medical conditions and medications, recent surgery, physician information, allergies, insurance information and more.

"Anyone with any health issues at all is going to benefit," Walters said.

She recommends people have their medicine in front of them when they fill the forms out, so they will write down the correct names and dosages. And you should fill the form out in pencil so you can easily update it.

You should update the forms any time you add a new medicine or stop taking an old one and you should review the forms at least every six months. Each family member should have his or her own File of Life.

So far YRMC has given out about 50,000 File of Life packets. Money to pay for them comes from proceeds from the hospital gift shop and from donations.

Anyone wanting to donate or set up an appointment for a presentation can call the volunteer department at 771-5678.

Sheriff, YRMC give boost to 'File of Life'<BR><BR> Program to save lives with info
Obituary: Shirley Ogle
BCFD implements Vial of Life to get vital information easier
THE GOOD PATIENT: Make sure your medical records are instantly available
'Do not resuscitate' documents must meet specific criteria