'Do not resuscitate' documents must meet specific criteria 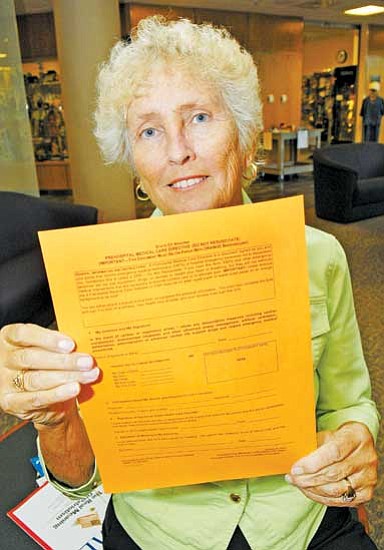 It's a tough call, bringing someone back to life when family members are pleading with you not to.

But because of Arizona's Do Not Resuscitate law, it's a call local firefighters are forced to make all too often.

"It's frustrating," said Don Devendorf, emergency services division chief for the Prescott Fire Department. "If there's an advance directive DNR, we should not even be called. But a lot of people aren't sure what to do, so they call 911."

What family members need to realize, Devendorf says, is that if an emergency responder has any doubt at all about the validity of a DNR form or if family members can't immediately produce it at the scene, then, according to state law, responders must try to revive the person.

"It means nothing unless it comes out on an orange sheet of paper," Devendorf stressed.

Capt. Scott Luedeman says there is one sure place to put the DNR form so emergency responders can find it: "If they can put it on the fridge, that's the best place - then they don't have to rely on anybody (to tell us about it)."

The refrigerator door also is the best place to keep a list of current medications so emergency responders will have that information, too, Luedeman said.

Arizona Revised Statute 36-3251 sets out the proper wording of a DNR form, known as a prehospital medical care directive.

The directive instructs emergency responders not to revive a person who has stopped breathing or whose heart has stopped beating.

The DNR forms are for situations that occur outside of a hospital or in a hospital emergency room.

All of the correct information for the document can be found at the Arizona Attorney General's website at www.azag.gov/life_care/DNR.pdf (the URL is case-sensitive; "DNR" must be in capital letters).

Just printing out the form and filling it out, however, won't do; it must be on orange paper.

A living will is a legal document that describes an adult's wishes about the types of medical treatment they want in the event of a terminal or incurable illness, such as a permanent coma or persistent vegetative state.

For more information about advance medical directives visit the Attorney General's website at www.azag.gov/life_care/FAQ.html("FAQ" must be capitalized).

YRMC spokeswoman Robbie Nicol says the hospital recommends that everyone who is considering signing a DNR form talk at length about it with his or her family doctor.

YRMC also has an ethics committee available 24 hours a day, seven days a week, to help healthcare providers and families resolve concerns or to help patients explore what their wishes are about resuscitation.

It's obviously "a deeply personal decision," Nicol said. "It is also one that generates heartfelt emotion in patients and their families."

Devendorf said fire department officials are willing to speak to community organizations to get the word out about the correct DNR form to use. The public can reach Devendorf by calling the fire department at 777-1700.

The public can get a DNR form already printed on orange paper at the information desks at YRMC's east and west campuses.

Individuals also can call the Attorney General's Phoenix office at 602-542-2124 and have a Life Care Planning Packet, which includes the DNR form, mailed to them.

Or they can pick the forms up between 11 a.m. and 1 p.m. on Mondays at the Attorney General's Prescott Valley branch office at the Civic Center, 7501 E. Civic Circle.