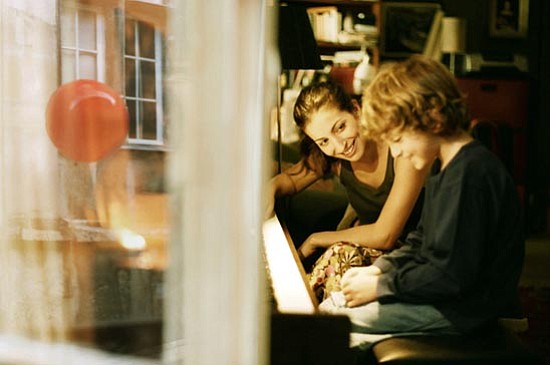 Plot: Suzanne (Binoche) is a single mother living in Paris with her 7 year-old son, Simon (Iteanu). Apparently unable to maintain any sort of order in her private life, though ably working as the narrator for stage productions of Chinese puppet shows, Suzanne hires Song (Song), a Chinese film student, as Simon's nanny.

The reticent Song, fluent in French, takes to her task of accompanying Simon everywhere while Suzanne slowly finds herself overwhelmed by the major and minor hassles of daily life. Her absent husband Pierre is in Montreal, apparently neglecting his novel as much as he has neglected Suzanne and their children. Their daughter Louise (Margolin), away in a Brussels boarding school, will soon return to Paris and needs a place to stay.

There's a furnished apartment downstairs in the building that Suzanne inherited from her mother that would be perfect for Louise. However, Marc (Girardot), a friend of Pierre's, lives downstairs but hasn't paid rent to Suzanne for more than a year. Simon visits Marc's apartment once a week for piano lessons, a fact that Marc parlays into taking over Suzanne's kitchen whenever the whim to hold a dinner party strikes his fancy.

Suzanne decides to move the piano upstairs to remove the sole weapon from Marc's bag of payback tricks. She then arranges for a blind (!) piano tuner to restore the piano to its former glory.

At this point, Marc makes an appearance. In the film's only bit of excitement, Marc accuses Suzanne, in forceful tones, of forsaking their friendship for a bit of back rent. All the while, the blind piano tuner plies his craft, to the incessant accompaniment of single piano notes.

Throughout this hodgepodge of daily chaos, Song takes Simon on walking tours of Paris, filming her own version of "The Red Balloon" on a hand-held video camera.

Meanwhile, the red balloon comes and goes, seemingly at whim, hovering near Simon every now and then before it flies away over the rooftops of Paris.

Star Player: Juliet Binoche. She's the only person in this film I could recognize as a professional actor. She does a good job of portraying a harried, stressed-out single mother, but I can see plenty of them any day.

Best Line: "Cin cin to you, my red balloon" from the closing song, some sort of French commercial jingle for ... I'm not even sure what product ... that signaled the end of the film.

My take: Albert La Morrisse's 1956 classic "The Red Balloon" inspired this film by Chinese director Hou Hsiao-Hsien. I had thought it would be a remake of the original, which I fondly remember from my childhood. I was profoundly disappointed.

This is no remake. I have no earthly idea what this film is about. This red balloon must be a metaphor for the errant path to nowhere the director chose to follow. The pace of the movie is so agonizingly slow and claustrophobic I wanted to run screaming from the theater.

"The Flight of the Red Balloon" lacks any real plot, interesting characters or exotic scenery. It's boring, somewhat confusing and pretty pointless.

Stars: One and a half out of five.

Now Playing: Movies for the week of Aug. 1
Review: Marital bonds tangle relationships in melodrama
Eastern music meets Westerners as students give the lessons
Out & About: Film festival presents 'Hector and the Search for Happiness' and 'The Song'
China orders actress Fan Bingbing to pay massive tax fine