Drivers, be aware: Students, school buses back on streets Aug. 4 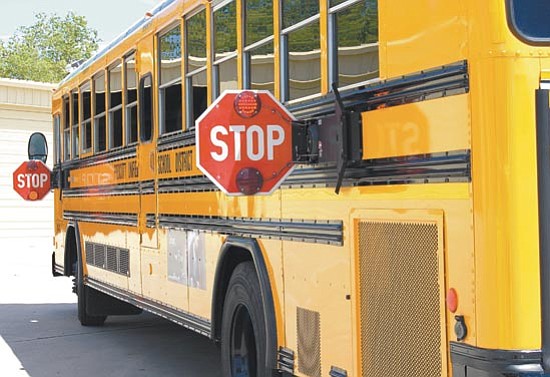 The morning commute to work may take a few minutes longer as buses stop to pick up children and the school zone restriction reduce speed limits to 15 miles per hour.

Prescott Unified School District Transportation Director Jim Cowen said drivers must stop when a school bus stops with its stop sign extended and lights flashing. It does not matter if the driver is approaching the bus or traveling behind it.

"Cars have to stop in both directions. This is critical because the area were most fatal (school-bus related) accidents happen is around the bus," Cowen said.

The most dangerous time of the year for bus students, Cowen said, is the first two weeks of school. Drivers have not seen the buses on the roads or the flashing lights during the summer months and they must be prepared for frequent stops.

Cowen suggests that drivers learn where the bus stops are in their neighborhood and what time children are getting on and off the bus.

As fall days get shorter and it is darker later into the early morning, Cowen said drivers should slow down and keep an eye out for children walking to the bus stop.

"Students are not allowed to cross the street behind the bus, but kids being kids, they do, especially during the afternoon drop-offs," Cowen said.

Drivers will flash the buses red warning lights 100 feet before coming to a stop. Cowen said each bus has red and yellow lights in front and back. When the bus stops, the red lights come on and the signs come out.

Drivers are not the only ones who should take precautionary measures.

Abia Judd Principal Larry Peterson and Mile High Middle School Principal Joe Howard agree, but take it one stop further. They feel parents should take the time to check out their child's route to school, whether they are walking to a bus stop, or waking or riding a bicycle to school.

"If a student is riding or walking to school, parents should check the route to make sure they are on the streets you want them to be on," Howard said.

"Whenever possible, students should never walk to the bus stop alone," Peterson added. "It can never be said enough - don't go to strangers. We want our children to be trusting, but they also need to keep a level of suspicion."

Cowen said that before school starts every student receives a letter about bus rules and penalties. Parents must sign the letter before their students can ride the bus.

The transportation director said PUSD has a number of penalties for misbehaving on the bus, up to and including loss of bus privileges.

"The ultimate decision of whether a student remains on the bus is with the transportation department," Cowen said.

The rules of conduct are for the safety of the students, and the bus driver. It only takes a second for the bus driver to become distracted, not a good idea with a 40-foot bus that weighs 35,000 pounds. Which is why, Cowen said, bus drivers are go through defensive driving training.

Students must be seated and facing forward before the bus moves. No food or gum chewing. No standing while the bus is moving and sticking hands, arms, heads or anything else out the windows.

Students should keep the noise level down. Students must control their backpacks and books on the seat and keep musical instruments out of the aisle and away from the exits.

The bottom line, Cowen said, is school is starting. Drivers need to keep an eye out for children and obey the school zone and school bus traffic laws.