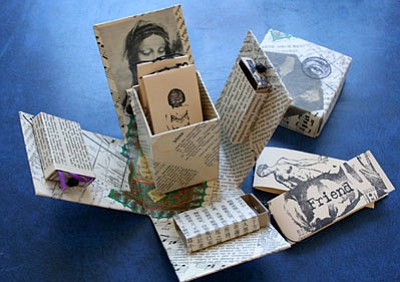 The lid comes off and four sides of the box, each with a small matchbox attached, fall open revealing another box standing in the center holding four miniature books.

The Prescott Valley resident is a longtime calligrapher (since 1981) and artist who evolved into the artists' bookmaking field after years of taking classes and workshops in bookbinding.

Beginning Aug. 3, Freeman's handmade books, and those of other local book artists, will be on display at the Prescott Public Library.

"Making books just seems to be a natural outgrowth of calligraphy," Freeman said.

Her paintings use quotations, lyrics or stories with colorfully scribed letters moving about the canvas. Many, however, take too long for viewers to stand and read beginning to end.

"I don't do long pieces anymore," she said. And that's where books entered the picture.

"I really enjoy doing complete books rather than focusing on the style," Freeman said.

A complete book, she explained, includes content or text. In learning many different ways to fold, spindle and bind books, she amassed "a whole lot of empty books I don't want anymore."

One beautifully bound book she made in 1997 has the blade of a knife embedded in its dark cover. Titled "Cutting up an Ox" by Chuang Tzu, translated by Thomas Merton, the Taoist story tells a tale of a master butcher in long ago China. Freeman designed the lettering, or hands, that shape the non-traditional page design.

Another advantage to taking up bookmaking was her recognition that paintings on walls become invisible to their owners after a while.

"With a book, you put it away on the bookshelf. Then when you come across it again and pull it out, it's like Christmas. You discover it again. That rediscovery of a book is wonderful."

In January this year, Freeman and four others from Prescott, Prescott Valley, and Sedona joined together to form a bookmaking club called SeQuence. Ann Alexander, founding member, reports that the organization has recently attracted a potential member from Oregon. There are no dues, no fees, no obligations. Members simply meet and exchange bookmaking tips and techniques.

Next week, its members, called the SeQuins, will exhibit many of their handmade books at the Prescott Public Library.

"The Director's Choice show at the library is a real privilege," Alexander said. PPL Director Toni Kaus chooses a favorite artist or artists each year to show their work in the library's glassed-in gallery on the main level.

This year Kaus invited SeQuence members to display their handiwork, and she also chose the artwork of Joseph Davidson, illustrator.

"I like it because I enjoy all the above and am able to do an adequate job at them. I never could stick with just one. Artists' books allows me to do them all," she said.

Alexander, who lives in Prescott, added that she thinks the artists' book movement began about 30 years ago, although she took her first bookmaking course in 2002. She said she hopes the exhibit will introduce the craft to the community and maybe launch an artists' book collection at the library.

The exhibit offers a look at 25 books of differing constructions from standard codex form, accordion, scroll, Coptic bound, printed, hand calligraphed, and even one with 3,694 screws. The show runs from Aug. 3-30 at the library. A reception with the book artists is Sunday, Aug. 10, from 2 - 4 p.m.

Those seeking more information may call Ann Alexander at 778-2713.