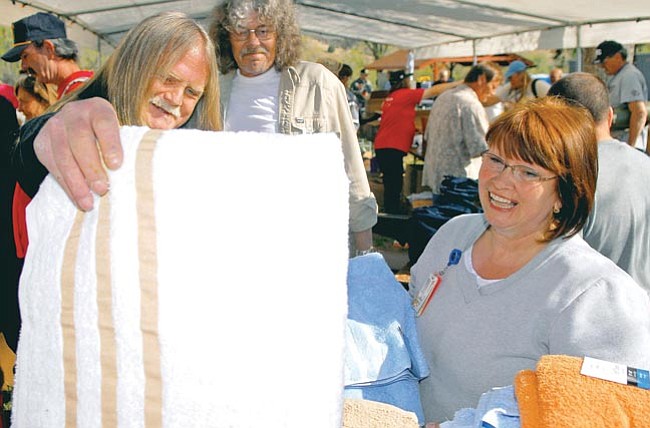 For the second year, homeless veterans flocked to Prescott to receive a helping hand and a chance to get their lives back on track.

US Vets, an organization that provides housing, counseling and job assistance to homeless veterans, organized the Homeless Veteran Stand Down event that took place at the Bob Stump VA Medical Center on Friday and Saturday. US Vets employees and VA hospital volunteers gave food, clothing, and medical screenings, as they did this past year, but the stand down featured a new addition this year - the "Homeless Court."

"It helps homeless veterans address misdemeanor and lower counts they have in Yavapai County," explained Skye Biasetti, US Vets operations coordinator. "It's mainly for charges related to homelessness, loitering charges, that sort of thing. A lot of homeless veterans have legal issues blocking them. One of our focuses is to get them into housing, to get back on track with life, and sometimes these charges stand in the way of that."

Biasetti said that to that end, the event had five local attorneys present hearing about legal issues the homeless veterans face, and taking their cases on a pro bono basis. She emphasized that the goal is not for them to avoid responsibility, and that many of the resolutions involved plea bargains for community service.

Frank Cimorelli, the Prescott VA hospital's spokesman, explained that the term "stand down" comes from a military term. A stand down is when front-line soldiers, who have been under extreme pressure, receive per-mission to take some time to get away from the stress of battle.

"I know stand downs were especially needed in Vietnam. Also, after 'Nam it was a real significant period of growth in homelessness for veterans, as well as substance abuse," Cimorelli said. "After Vietnam, veterans didn't trust the government, and didn't go into VA, because they saw it as an extension of the government. A lot of them turned to 'self-medicating' with drugs and alcohol. They still know the term 'stand down,' though - they remember it as something valuable."

Although many outreach events for the homeless take place during the winter, in order to give them supplies they need to survive the harsh weather, Cimorelli said that having the event now made it likely to reach a larger group of people.

"There's a 'circuit' with the homeless community, those who are ambul-atory," Cimorelli said. "I remember when I was a kid, homeless guys would hitch a ride on the trains to get where it's cooler during the summer. It's the same today, for the most part. A lot of homeless people will flock from Phoenix to the Prescott area during the summer, so now, it's actually a great time to reach a larger number of them."

Biasetti said that getting the word out to the homeless community required a very differ-ent approach from publicizing most events because traditional modes of communication were irrelevant. Instead, US Vets fell back on word-of-mouth communication.

"Our outreach goes out into the hills and woods where a lot of the homeless live, to the shelters and the food banks, anywhere we could reach the homeless," Biasetti said. "We told them to spread the word to the others. There's so many more homeless, and homeless veterans, here, than most people realize."