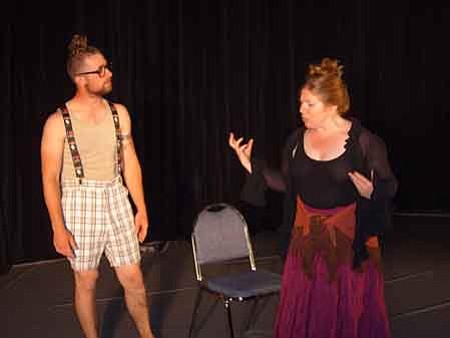 Friday night, five or six writers will charge their their creative vortices to conceive, develop and write a script for a play two actors will perform following night.

The second production of Prescott College's "The 24-Hour Plays" begins at 7:30 p.m. Saturday at the Granite Street Performing Arts Center.

After meeting with actors and directors at 9 p.m. at the center, playwrights will spend the rest of the night writing a 10-minute play, then meet with directors the following morning.

The directors, unaware of who the authors are, will read each play and select one.

Actors are then assigned and start working with the directors, rehearsing the remainder of the day.

"It is done without the scripts in hand, so there's a commitment to actually memorizing it as best the actors can, which is a challenge for sure," said Prescott College performing arts program director Charissa Menefee.

"It's an exciting opportunity for a bunch of creative people coming together and accepting the challenge of putting something together very quickly,' Menefee said.

Menefee said the project attracts some actors who never commit to standard drama productions because of the time demands, and "just take the weekend to be immersed."

"I've had some folks who worked with me on it before, but not very many. Most of the people doing it this time have never done the 24-hour plays - some of them not much theater before," she said.

Writers are presented with a cast on Friday night, and decide who they are going to write for.

"Ideally, nobody comes in with any idea of a plot, characters or anything. They're just supposed to take it right then and become inspired."