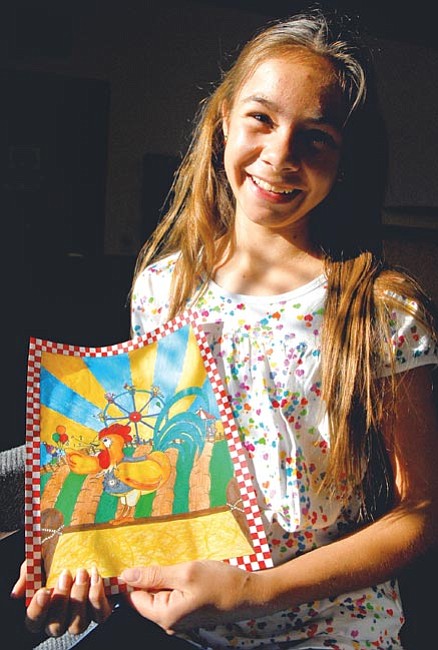 The Daily Courier/Matt Hinshaw<p> Shalom Eis, 12, of Dewey displays her colored pencil and marker drawing she submitted in the contest for the Yavapai County Fair Premium Book Tuesday afternoon in Prescott Valley. There were more than 250 entries this year for the theme “Something to Crow About,” but Shalom’s entry took first in the contest.

PRESCOTT - Shalom Eis, 12, of Dewey has something to crow about.

Her drawing of a rooster on a fence in front of ducks riding a ferris wheel is the cover of the 2008 Yavapai County Fair Premium Book.

The fair association conducts a contest each year for students throughout the county to design the artwork for the premium book cover.

This is the third year Shalom has entered the fair book contest. She said a friend told her about the contest a couple of years ago.

Shalom has placed in her age group before. However, this is the first year she has won the rosette for best entry.

"This is the first time in about five years that contest was not won by a high school student," Fair Book Editor and Coordinator Vanessa Martin said.

She said the judges chose Shalom's drawing from 254 entries.

"It had everything the judges where looking for - bright colors with graphically strong lines representing the theme for this year's fair," Martin said.

"It took a lot of thinking to draw a picture based on the theme 'Something to Crow About in 2008,'" Shalom said.

Once she had a picture in mind, Shalom said she drew it in pencil in about 10 minutes. She spent another day re-drawing the lines in ink and then coloring the picture with colored pencils and markers.

In addition to having her artwork on the cover of the premium book, Shalom also received $100 for art supplies and $50 she can spend for anything she wants.

She said she plans to buy something for her friend who told her about the contest, save some for a vacation and "I owe my mom for this shirt I have on."

Shalom said she has drawn "since I could hold a crayon."

She hopes to be a working artist one day, either as a graphic artist or illustrator.