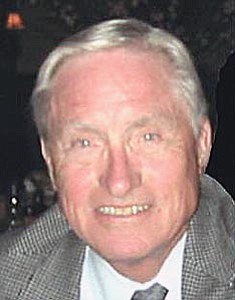 A native of Prescott, Ariz., age 75 years, Jack was a graduate of the University of Arizona, later serving in the Air Force as a Captain in the Strategic Air Command. Jack spent 20 years in the banking industry, as an Executive of Trust Departments in both Arizona and Santa Rosa. In 1981, he joined Merrill Lynch as a Financial Adviser and Vice President. He served as President of the Chamber of Commerce in Prescott, Ariz. and Santa Rosa, and was a member of Rotary for over 20 years. Jack's associates have distinguished him as "Gentleman Jack" for his remarkable grace and diplomacy. Jack enjoyed painting, genealogy, guitar and the great outdoors, especially golfing, hiking and camping, but what he loved most was spending time with his family. He was cherished and loved by his family, admired by his friends, and will be greatly missed by all.

Donations in his memory may be made to Santa Rosa Rotary Scholarship Fund, P.O. Box 505, Santa Rosa, CA 95402.

Daniels Chapel of the Roses Funeral and Cremation Services assisted the family with arrangements.