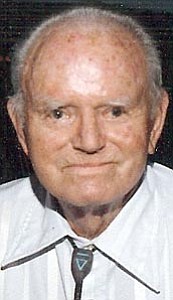 Clyde Delbert Pierce, 91, "passed over the Great Divide" to join his wife, Anna Beth, on Friday, April 18, 2008, in Prescott. He was the oldest of four children born to Hazel Amelia and Nelson Clyde Pierce on Dec. 19, 1916. Delbert's wife of 69 years, Anna Beth, preceded him in death just 12 days earlier and Delbert lost his will to live.

He was born and raised in Phoenix and Scottsdale. At 10 years of age, he met his future wife and best friend for the next 81 years, Anna Beth. He and Anna Beth were in the first graduating class from Scotts-dale High School where he served as Quarterback of the football team and Student Body President. In later years, he served on the Scottsdale School Board. Delbert always loved the land and the outdoors. He attended Colorado State University and the University of Arizona studying Animal Science. On Nov. 8, 1938, he married his lifelong sweetheart, Anna Beth Allgood. They lived in Phoenix farming and raising cattle. He and his father started Pierce Farms, Inc. when they purchased several farms and properties in the Valley. Delbert did what he had always wanted to do, live a life in agriculture. He and his father farmed at Thomas Road and Chicago Avenue, later named 44th Street. After a family tragedy of losing a son, Delbert and Anna Beth opened the Larro feed store on Van Buren and worked at The Tropical Grove Nursery until he returned to farming and raising registered Shorthorn cattle.

Throughout his life, Delbert owned several ranches around Northern Arizona, one at Mayer, then the Doll Baby Ranch in Payson, Cold Springs Ranch in Payson, and in 1959 settled in Prescott after buying the Las Vegas Ranch. In 1961, his family-owned Pierce Farms, Inc. purchased the adjoining Long Meadow Ranch. Delbert operated both ranches with the help of Anna Beth until 1975. He bred and raised registered and commercial Hereford cattle, selling and showing cattle at the Arizona National Livestock Show, which he helped organize in 1949. The Las Vegas Ranch Herefords won many championship ribbons at ANLS, which cover the wall of the Ranch office. In 1981, they showed the Grand Champion Heifer at the National Western Livestock Show in Denver at the American Hereford Association Centennial Show with the help of Larry Stark.

Delbert believed in God, his wife, his family, treating people as he wanted to be treated, honesty, integrity, hard work, and his Republican Party. He could never have a conversation without getting into politics. He always said that a man's word is his bond and lived with business and a handshake. He loved gardening, planting dahlias and always planted trees "to make the world a better place when you leave." He was active in his church, as a 4-H leader, and in numerous associations.

In April 1974, Delbert was instrumental in saving the Bashford House from destruction by donating the House and helped raise funds to have it moved to its current location on the grounds of the Sharlot Hall Museum.

Hampton Funeral Home assisted in helping the family with both Anna Beth and Delbert's arrangements that will take place exactly two weeks apart. The family graciously thanks the many friends that have offered love and support during the past two difficult weeks, the very special and loving caregivers that helped Anna Beth and Delbert for the past few years of their lives, the doctors and nurses, Granite Mountain Hospice, Butch Hampton and the American Evangelical Lutheran Church. Only in Prescott is there so much warm support and friendship. Thank you.

The Seeds of Heritage
Obituary: Anna Beth Allgood-Pierce
Pierce was a man connected to his land
Phippen Museum announces new Hall class
Editorial: Longtime rancher was example to all