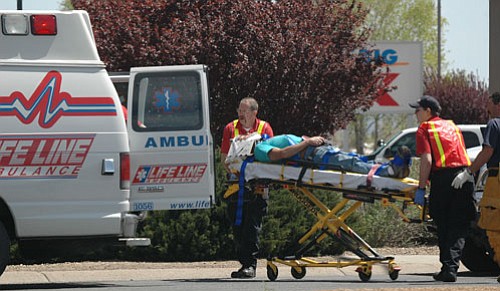 Lifeline medics load a man into the ambulance after a collision at Pav Way and Lake Valley Monday.<br>TribPhoto/Heidi Dahms Foster

Three accidents within a little over an hour in Prescott Valley Monday sent 6 people to hospitals and kept emergency crews hopping.

Police and fire crews received 2 calls for accidents on Highway 69 within minutes of each other at about 11 a.m. About an hour later, crews responded to yet another accident.

In the most serious accident, a two-vehicle collision at Highway 69 and Navajo Drive, Prescott Valley Police said Olis Dean Farley, 77, of Mayer, was westbound on Highway 69 when he attempted to make a left turn onto Navajo Drive. A 1992 Chevy pickup driven by Peter Hollowell, 44, of Prescott, collided with him.

Police said Hollowell was pulling a flatbed trailer with a 1963 International pickup and assorted vehicle parts on it. The collision caused the trailer to separate and crash into the light pole at the southeast corner of the intersection.

Farley's vehicle received major passenger side damage. He was wearing a seat belt, police said. Native Air helicopter crews flew Farley to John C. Lincoln Hospital in Phoenix for treatment of abdominal and lower back pain and a facial laceration.

Another multi-vehicle collision occurred at Windsong and Highway 69 when a tow truck rear-ended a Bronco, which drove the Bronco into and over the top of a Plymouth, after which it sideswiped a Toyota Tundra truck.

Police cited the on-duty tow truck driver, 23-year-old Carl Pointer, who was not injured, for Failure to Control Speed to Avoid a Collision.

CYFD personnel treated the Bronco's driver at the scene. Lifeline personnel took the driver of the Plymouth, a 19-year-old woman, and two passengers to YRMC East for treatment of minor injuries.

The accident did not injure the driver of the Tundra.

At about 12:10 another collision occurred at Pav Way and Lake Valley Road, when Eric Bonwit, 47, of PV, rear-ended a Toyota truck driven by Robert Correa of Payson. Police said emergency personnel took Bonwit's 58-year-old passenger to YRMC East as a precaution due to a recent prior neck injury.

Police said impairment did not appear to be a factor in the accidents. They will continue to investigate.