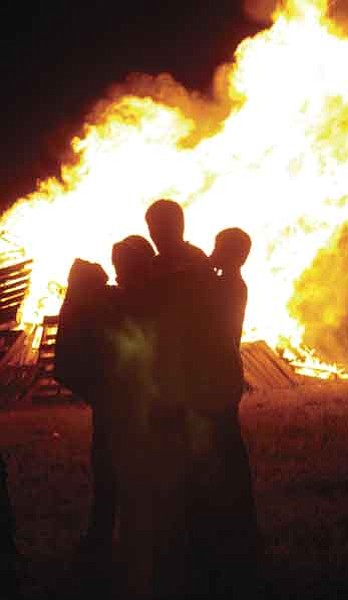 Bradshaw Mountain High school students gather around their homecoming bonfire Thursday night in Prescott Valley. The flames leaped into the air as did their spirits on over Friday night’s game against Kellis High school. The Daily Courier/Jo. L. Keener

PRESCOTT VALLEY - Bradshaw Mountain High School's homecoming game is tonight, but the school is not having a parade this year.

Instead, BMHS Principal Jim Souder said the school played host to a variety of other activities throughout the week. For example, students lit a bonfire and bashed in an old car on the school's front field Thursday night.

"There was no one watching (the homecoming parade in 2006)," Souder said. "It was a big dud event. For all the time everyone put into it, it's just not worth it."

He said the 2006 homecoming parade lasted about 10 minutes. He is not sure if the school will bring back the floats in the future.

"It doesn't really bother me," said 17-year-old BMHS varsity football player Michael Blevins, about the lack of floats and a parade this year. He was just happy to watch the bonfire erupt in front of the crowd of students.

On the other hand, 18-year-old Alicia Rubio, who is a senior, felt differently.

"That's lame. It's a tradition. How could we not do that?" she said.

Both students, however, were happy to show their school spirit Thursday night at the car bashing and bonfire for tonight's game. BMHS is playing Kellis High School from Glendale.

As hordes of BMHS loyalists filtered onto the school grounds Thursday, an aurora of flames exploded from the school's front field, illuminating an old nearby car covered with spray-painted phrases such as "BMHS Beat the Cougars 2007." The bonfire is a common occurrence every year. Yet some students said they do not remember a car bashing.

"I think it is kinda cool (students get to bash in the car)," Alicia said.

Some students carried wooden sticks with them, ready to have their turn on the vehicle. For Alicia, this was a way to create memories of her senior year.

"It's our senior year, and we really want to liven up homecoming," she said.