The eyes have it: Father and son team provides vision care 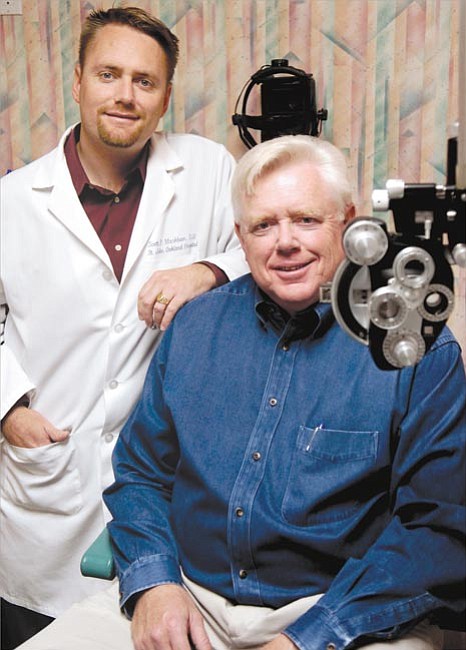 PRESCOTT - One is a veteran optometrist.

The other is an ophthalmologist.

Together, John and Scott Markham are a father-and son team with the same vision.

The men work at the Prescott Vision and Eye Surgery Center on Willow Creek Road that benefits both them and their clients.

"He gets the benefit of my experience and I get the benefit of all the technology he know about and the broader medical knowledge base to better serve the clients," John said. "We're learning from each other."

Scott agreed with his dad.

John arrived in Prescott that year from the Phoenix area after buying a practice on Cortez Street.

He moved the business up the street near the National Bank of Arizona branch office six months later and stayed there for five years.

John moved the practice to Iron Springs Road in 1984 and he relocated to the Willow Creek building in 1996.

As the business grew, so did Scott, who used to cut and grind lenses as a teenager and dispense contact lenses.

Scott went to college and eventually worked as a general surgeon in New Mexico for a couple of years before going to Michigan State University to study ophthalmology and he started seeing patients at his father's practice this summer.

"It's actually been great," he said. "He (John) has been a great role model."

And John enjoys the schedule flexibility that his son and the partner provides.

John and Scott have second-generation patients.

"I'm seeing kids of children I went to school with," Scott said.

It also helps that both have specialties that meld perfectly together.

John specializes in lenses and contacts and Scott John focuses on eye surgery.

Look into my eyes
Community pulls together to give sight
The scariest part of Halloween may be costume contact lenses, an eye doctor says
Faces looking blurry? Seeing halos at night? Could be cataracts
Optometrist joins Prescott vision center