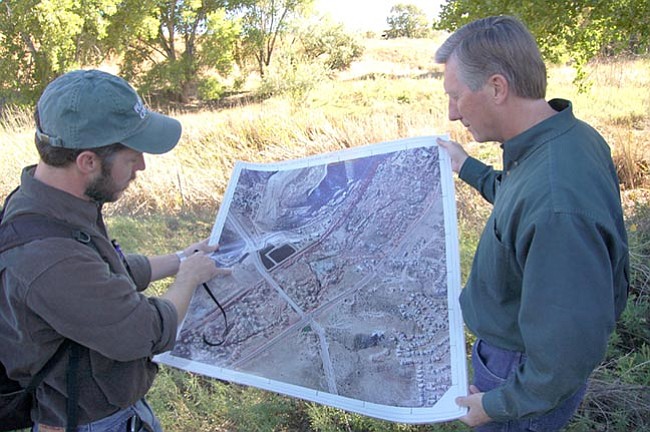 The Daily Courier/Doug Cook<br /><br /><!-- 1upcrlf2 -->Rolling out an aerial map, Prescott Creeks Preservation Association Executive Director Michael Byrd, left, points to a location near the Watson Woods Riparian Preserve as Arizona Department of Environmental Quality Director Steve Owens looks on. This past Thursday, Byrd led a small contingent including Owens and Prescott Mayor-Elect Jack Wilson, on a tour of the preserve that Prescott Creeks is refurbishing.

PRESCOTT - Late this past week, Prescott Creeks Preservation Association, a Prescott-based non-profit organization, announced it has collected a total of $1.4 million in state grants to restore the ecological conditions at Watson Woods Riparian Preserve.

The preserve, located along the Peavine Trail off Prescott Lakes Parkway and Sundog Ranch Road, stands along a tree-lined stretch of Granite Creek, one that environmentalists and others identify as an "impaired" water body.

Just three days earlier, on Oct. 15, the Arizona Water Protection Fund Commission voted to give Prescott Creeks $798,988 for the restoration.

Prescott Creeks will spend a portion of its grant money to reshape a storm-water retention basin on the preserve. The basin collects part of the runoff from a drainage ditch along the intersection of Highway 69 and Prescott Lakes Parkway's bridge.

Byrd said a larger modified basin with better culverts would significantly reduce erosion that has negatively impacted the preserve. The new basin could accommodate a five-plus-year storm event and protect the animal species living there.

The preserve's boundaries extend east to the old railroad grade, west to Highway 89, south to Sundog Industrial Park, and north to the Watson Lake property.

"All of that storm water off the bridge drains to the east of the preserve and then runs down," Byrd said.

Prescott Creeks will use part of a $217,000 grant it received from ADEQ in 2006 to redesign the basin, repair the erosion and plant riparian vegetation.

Earthmovers and volunteers will participate in this job. Byrd said his organization plans to start the project in November or December after finalizing an engineering design.

Above all, Owens said, ADEQ is committed to saving the preserve from encroaching development.

"The fact that it is one of the last wooded riparian areas in one of the fastest growing areas of the state, it has a great deal of significance in and of itself," Owens said. "The fact that it's in an area of biological diversity as well as diversity for all the plant and animal life around here, it provides a terrific experience for the people who live in the Prescott area. It's critical that we preserve areas like this because of the rapid development we're experiencing."

Byrd said Prescott Creeks' five-year restoration project will bring back the natural stream processes and functions of the Granite Creek stream channel as well as enhance, restore and re-create naturally occurring riparian wetlands along the creek.

Miners altered the creek bed in and around the preserve in the middle of the 20th century to collect sand and gravel, altering the course of Granite Creek. Pollutants from downstream mining have harmed water quality, too.

"With this restoration work, not only will we improve the habitat, but the intention is to improve the water-quality conditions where both Granite Creek and Watson Lake come off that impaired place," Byrd said.

Prescott Creeks already has plans to realign the creek.

"The main disturbance has been the sand and gravel extractions," Byrd said. "We're trying to get this stream to function in a natural way. In a lot of the situations, it's not able to access the floodplains. So water can't spread out, and you have pollutants moving downstream which are most likely contributing to the impairment of Watson Lake."

Prescott Creeks also is monitoring the plants, animals and water within the preserve to evaluate the project's performance. Members of the organiza-tion are educating and involving community members in the restoration process.

It is not uncommon for visitors to see mule deer, Rocky Mountain elk and great blue herons - large wading birds with long necks - at the preserve.

Each month, Byrd estimates 12,000 bicyclists and pedestrians use the rail trail adjacent to Watson Woods, making it a haven for nature lovers.

In June, Owens presented Granite Creeks with a $582,253 grant for ecological restoration of the 126-acre nature preserve, a public/non-profit partnership between the City of Prescott and Prescott Creeks.

Prescott Creeks wants to preserve the eight creeks that wind through the city, primarily because of their cool, shady greenways.

The preserve, a cottonwood and red willow forest area, is open to the public for both bird watching and hiking.

For more information about the ongoing restoration work at Watson Woods Riparian Preserve or to volunteer for a project, visit www.prescottcreeks.org or call 445-5669.