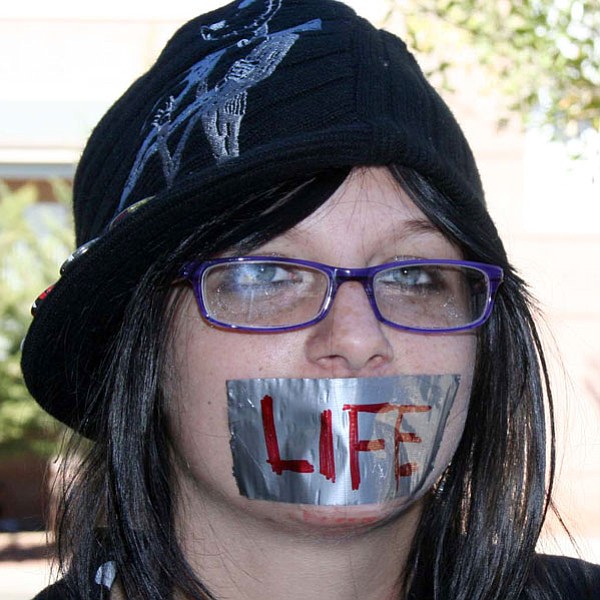 Trib Photo/Sue Tone<br> Charlee Towles, 15, gave up her voice for one day Tuesday at Bradshaw Mountain High School in support of the student-led pro-life protest called Silent Day. More than 200 students joined her in wearing red armbands for the cause.

The Bradshaw Mountain High School sophomore felt strongly about her support for the pro-life movement so she petitioned the principal for the right not to speak for one day.

Charlee Towles, 15, collected more than 200 signatures on petitions she gave BMHS Principal Jim Souder requesting permission for students to wear tape across their mouths and not speak for one day.

"Thirteen countries have legalized abortions. The duct tape asks, 'Can you give up your voice for a day for those who can't have a voice?'" Towles said, uncovering her mouth for a brief interview.

Souder, who acknowledged his own fervent pro-life beliefs, said students have a right not to speak in class.

"From an educational point of view, we need our students to participate in class," he said. Students who wish to partake in the day of silence know that teachers may "dock" students if they require verbal class participation.

Towles said she spoke to all her teachers ahead of time, informing them of her decision to join a nationwide group for Silent Day, which takes place on the second-to-last Tuesday of October. Students wear red armbands and some choose to tape their mouths or remain silent for the day.

"We can't deny you the right to not speak, but we have to treat it delicately and with respect," Souder told Towles. "We're not giving every group carte blanche not to speak."

He gave an example of coming to school but not working for the day in support of those who are unable to work.

"Kids have the right to sponsor student-led statements, or protests, if you will, so long as it does not disrupt the educational environment of the school. It's the mission of the school to provide an education versus the right of students to protest," he said.

Towles said Tuesday morning that the group has had no confrontations with any pro-choice students, and she had no knowledge of any pro-choice group or organization on or off campus.