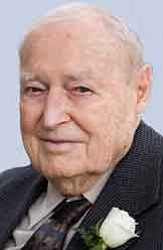 Bill moved to Prescott at the age of 8 and attended Washington Elementary School. He graduated from Prescott High School in 1943, where he played on the football team. Upon graduation, Bill joined the U.S. Navy and was sent to the Navy ROTC Unit at the University of New Mexico. At the university, he was a member of Pi Kappa Alpha fraternity and was a thee-year letterman in football. He played with U.N.M. in the Sun Bowl game on Jan. 1, 1946.

On Feb. 22, 1946, he married Gloria McLaughlin, his wife of 61 years. The following day, he received his commission in the U.S. Navy and was separated from service in July 1946. He returned to U.N.M. and received his B.S. degree in Civil Engineering in 1949.

Upon returning to Prescott, he joined the Yavapai County Engineer's Office. In June 1952, he was recalled to service during the Korean War and spent two years at Subic Bay in the Philippines as a Seabee Officer. When Bill again returned to Prescott, he started his own engineering firm, Wm. J. Cheek, Consulting Civil Engineer and retired from business in 1987.

Bill and his wife were world travelers, enjoying several trips overseas each year. Bill's favorite places to visit were New Guinea and the big game areas of Africa.

He was predeceased by his father James H. Cheek; his mother Gladys Cheek Dowell and his stepfather Orvil Dowell.

According to his wishes, Bill will be cremated and there will be no services. Memorials may be sent to one's favorite charity.