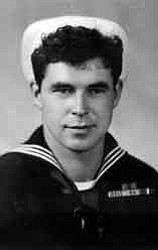 This photo of Keith Staker is from his days serving in the U.S. Navy. Courtesy

"I was drafted into the war, and I was in the Navy as a machinist," Staker said. "I was on the USS Shelter, and I'd load the big gun, the 3-inch cannon, a .50-caliber gun. I married Carmelite after the war. We grew up in the same little town, Carmelite and I, Woodward, Iowa. We didn't actually start seeing each other until I got home from the service."

Carmelite went through medical school to become a nurse, and Keith worked a variety of jobs over the years, including janitorial work and work for the Better-Bilt building company. Through it all, both in Iowa and later in the Prescott area, the Stakers devoted a portion of their time to volunteer work and charitable causes.

"With any volunteer work, you get a good feeling, but volunteering at (the Bob Stump VA Medical Center) is better for me, I get to have a sense of camaraderie with my fellow veterans," said Staker. "I've been volunteering here for years, and it's added up to a lot of hours. A friend at the VA, who was inaugurated last year, suggested I apply for the Hall of Fame. I was surprised, and really glad, when they said I was accepted."

In addition to volunteering at the VA hospital, Staker has volunteered at the Yavapai Regional Medical Center and been heavily involved with church-based volunteerism, the American Legion and the 4-H Club.

"I was so proud when I heard the news," Carmelite said. "He and I have both very active volunteers, and we do most of it together. It's hard to imagine how much we've done over the years. You know when you have a long life, it's hard to remember all you've done, but when you put it down on paper, it really hits you."

Keith Staker said he has three children, four grandchildren and five great grandchildren. His wife and one of his daughters, a Prescott Valley resident, will accompany him to Phoenix when he receives his award. The rest of his children live in Iowa, he said.

"I've got a little over 1,500 hours here at the VA, and maybe 2,800 at the (Yavapai Regional Medical Center) hospital," said Keith. "Now, wherever I work, people know me. I've got a lot of friends here to say hi to, to talk to. I enjoy it a lot. All the friends are a kind of reward, too."