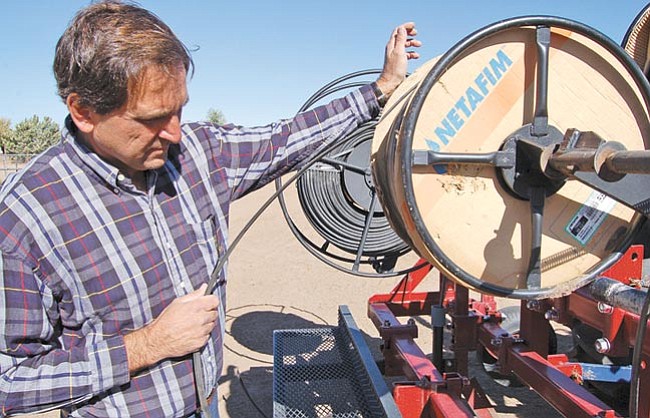 The Daily Courier/Doug Cook Chino Valley farmer Norm Freeman draws down a piece of specialized black plastic tape that is used for drip irrigation systems, including the one on his farm.

On a 4-acre parcel of his own Freeman Farms at the corner of Road 3 South and Road 1 East in Chino Valley, Freeman has installed a complex, computer-controlled underground drip system for growing high-quality grass hay.

Freeman, who is also a businessman, spent about $30,000 for installation and materials for the system, which he uses to educate the public about its benefits for conserving water.

Although the average farmer could not afford this type of irrigation, Freeman said the Chino Valley Irrigation District and the federal government plan to make it more affordable for local farmers to implement in the future through grant applications.

Since local agricultural engineer Paul Downey installed the system on Freeman's farm in late April and May, Freeman has been running a comparative analysis of water usage versus production on that 4-acre field against another field of hay he grew with aboveground sprinklers.

Downey said farmers who have drip irrigation systems pay a lot up front, but they save money in the long run. He said a sprinkler system is 70 percent efficient, but it often drops to 50 percent on windy days, which are common in Chino Valley.

On the other hand, a drip system is 90 to 95 percent efficient because the water goes directly to the roots, saving farmers time and money.

"The primary benefit is that you get a higher level of production with a lot less water," Downey said. "You get a real efficient use of your land because you use less water than you would with a sprinkler irrigation system. You get more production with a smaller amount of water."

Freeman uses the tail water from the system to water his new 3-acre pumpkin patch, which is flourishing even though he planted the crop late in the growing cycle.

Freeman employs three different forms of irrigation on his farm, including laser-graded flood irrigation and two types of sprinklers in addition to the underground drip.

To install the drip system, Downey utilized an injection rig tractor. The tractor is equipped with two spools of specialized thin, enclosed plastic tape that he laid underneath the topsoil in several vertical rows across Freeman's 4-acre parcel.

Inside the black plastic tape, which is really more like a tube, are tiny white plastic drip emitters that slowly release the water into the ground on a timed basis. Freeman said the emitters regulate water pressure and deliver .13 inches of water to his field every hour.

Freeman keeps the rig on the farm for educational purposes when visitors come to tour his property.

"We inject this tape into the dirt, and about every 16 inches on this tape is one of these little micro emitters," Freeman said. "It delivers a very precise amount of water."

In order for irrigation to be efficient for crops, Freeman says it is crucial to consistently apply water into the soil. Sprinklers are not as efficient as drip systems because they do not uniformly distribute the water across an entire irrigation field.

Farmers can buy different types of drip tape that emit varying amounts of water, depending on the need.

Drip irrigation increasingly will become a vital part of farming in the 21st century.

On his farm, Freeman pumps water from an irrigation well, which feeds a nearby storage pond.

He fills the pond and pumps at a higher velocity out of the pond and into the irrigation system. He monitors water levels using a specialized computer software program on a laptop computer next to his storage pond.

Freeman's farm also serves as a horse-breeding site and an official Arizona Game and Fish Department rehab center for birds.

The irrigation pond is an initial release site for birds the farm has nursed back to health.