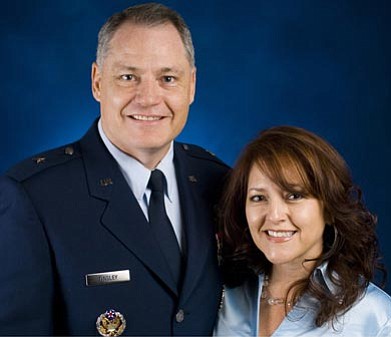 Thomas L. Tinsley has been promoted to the rank of brigadier general in the U.S. Air Force.

Tinsley, born in Wheatland, Wyo., is the son of Del Tinsley of Casper, Wyo., and Marilyn Tinsley of Chadron, Neb., and grandson of Thelma Tinsley of Guernsey, Wyo.

His wife, Joanna, is the daughter of Adeline Gonzales of Cottonwood, Ariz.

The general is currently serving as the commander of the 3rd Wing, Elmendorf Air Force Base, Anchorage, Alaska.

The general graduated from Torrington High School, Wyo., and received a bachelor's degree in 1984 from Embry-Riddle Aeronautical University in Prescott.