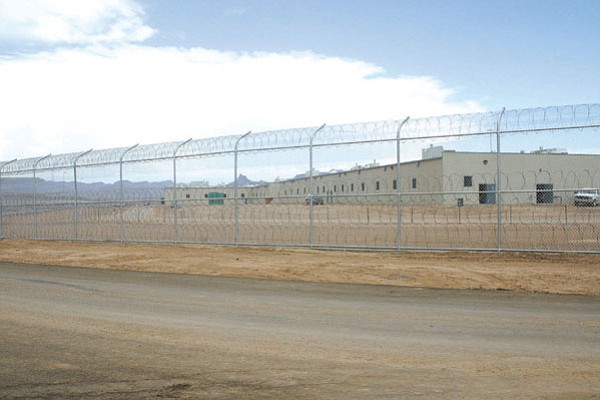 Kingman residents are happy with the community service of prisoners, and the way MTC has conducted business in the town.<br>Photo courtesy Kingman Daily Miner

How do the two communities in Arizona that have a Management & Training Corporation private minimum-security prison feel about it?

Beverly Liles, president and chief executive officer of the Kingman Area Chamber of Commerce, said, "If we had to do it all over again and knew what we know now, I'm sure we would encourage them to come. They have been great neighbors. The community service they have done is worth it all."

Mohave County Assessor Ron Nicholson said he believes if MTC proposed to build another private minimum-security prison next to its 1,400-bed minimum-security prison in the industrial corridor in the Golden Valley area that the county and residents would support it. Scott Yates, MTC's Kingman deputy warden for operations, agrees.

Mike Reuwsat, town manager of Marana, said it would be interesting to see if residents of his town would support a prison coming today. Most of the residents of that rapidly growing town don't realize it already has one, he said.

The 500-bed Marana prison, which was MTC's first one in Arizona, is out by itself in the northwest corner of town by the airport, Reuwsat said.

He said, "Our relationship with the prison has been productive over the years. They have provided a lot of inmate labor to clean up right of ways. Also, several of our residents work there, and the inmates go to our local health facilities."

Mike Murphy, MTC's vice-president for corrections marketing, said inmates at the Marana prison restored an old historic building as one of their community service projects.

Liles said the MTC prison inmates' community projects include painting the city building the chamber office is in; set up and clean up for the Kingman air show the past two years; set up for Kingman's annual PRCA rodeo; ground clean up for schools during the summer; dog training for rescued dogs; and built special outdoor barbecues for non-profits to use for raffles.

MTC's Kingman prison sits on 29 of the 160 acres the firm owns in the industrial corridor by Golden Valley. Parking, a warehouse building and industry building take up another five acres.

A staff of 250 employees, a lot of whom are women, serve the 1,400-1,500 inmates at the prison. Yates said the prison has 1,100 minimum-security and 300 medium-security inmates. The prison also has 108 emergency beds. The prison uses dormitories to house all its inmates.

The prison only has 73 detention cells. Yates said these cells are for inmates who are under investigation or pending transfer.

Liles said there was no enticement to get MTC to locate in Mohave County.

Mohave County Sheriff Tom Sheahan said people in Mohave County originally thought the private prison would be a problem. "It has turned out to be a good neighbor. They haven't had any incidents there, nor has there been any escapes. If there is a problem inside the prison the Arizona Department of Corrections investigative arm sends people up to investigate," he said.

He, Liles and Ruewsat all said the prison staffs are active in the community.

"They belong to the chamber, our Kingman Meth Coalition and one of the management's husbands has chaired out annual air show for the past two years, which has been a very large and successful event," Liles said. "They are also a member of Mohave Care Net which is a dog rescue program."

Several Prescott Valley residents are worried a prison coming to town will devalue their property.

Since it is located in an industrial area there are few residences around it, but the prison hasn't caused their value to go down, he said. "What impact a prison will have on a prospective buyer, I can't say."

Nicholson said, "The prison has given a tremendous boost to local taxing authorities' budgets."

The prison pays 1.6 times the tax rate that homeowners do, he said. Murphy said $1 million-plus homes are being built right around the Folsom prison in California. Several other prisons MTC operates have subdivisions building right beside the prison, he said.

He knows of no study showing prisons drive up or reduce property value when it moves into a community.

Murphy said the 2,000-bed dormitory-style minimum-security prison MTC proposes for Prescott Valley will cost between $100 and $150 million to build.

Since it will have dormitories to house inmates it would be cost prohibitive to convert to a high-security prison with cells. "You're looking at double to triple the cost to renovate it," he said.

He said MTC is in negotiations with Prescott Valley to determine its fair share of extending the sewer, natural gas, water lines and fiber optics to the proposed prison site. "We've got to look at what it would cost if the utilities come directly to our site and if they come to the best point for the future development of the industrial park," he said. "We're willing to pay our fair share or more. We heard what the council said."

However, a bridge is necessary.

In regard to staff, Murphy said he expects to hire people from throughout Yavapai County. "I'd expect the majority of the staff to come from Prescott Valley," he said.

As to inmates' girlfriends or families moving to the community to be close to them, Murphy said, it doesn't happen because these inmates are going to be in prison only six to eight months.

Liles, Yates and Reuwsat all agreed.

However, these minimum-security prisons do create business for area motels, restaurants, and other tourist businesses because the visiting hours are on weekends and holidays, Murphy said.

Murphy said they also look for what industries they can bring within the prisons. In Kingman, H&H Trailers, which builds utility trailers, is going to open a plant under the federal prison program that Yates expects will employ 60-100 prisoners. They will be paid the prevailing wage, he said.

Murphy said they have talked to a tree farm in the Prescott Valley area as a possible industry for that prison.

He said MTC's prisons also partner with area colleges for apprenticeship programs to train prisoners for possible jobs in the area when they are released.

At several MTC prisons, Murphy said, the inmates build prefab houses for Habitat for Humanity to learn trades and help the local community.