Memories of Christmas on an Arizona ranch 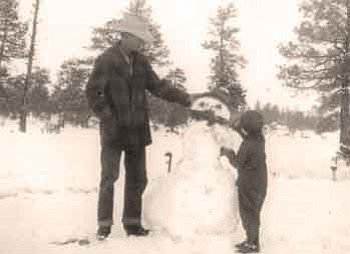 Courtesy Mona and her father Walt build a snowman at the Yolo Ranch in the 1940s.

A Christmas probably could not be any more perfect than a snowy day on an isolated Arizona ranch.

Mona McCroskey lived that dream when she was growing up on the Yolo Ranch northwest of Prescott, where her father was the foreman from 1941 to 1949.

"I wouldn't give up my childhood for anything," she said. "The forest is really pretty out there. And when it snowed, it really snowed."

To top off her fairy-tale memories of her early years, little Mona received wonderful Christmas gifts from the wealthy owners of the ranches that her father managed.

Her great-grandfather Lebbius Larremore first arrived in this region in the 1880s. Her father Walter Lange was the foreman at a ranch near the Verde River headwaters during her first few years of life. Her parents stayed friends with the owner, Frances Clark, for many decades.

"She was like a fairy godmother around Christmas," Mona recalled.

Clark sent little Mona a real baby buggy when she wanted one for her doll at the Yolo Ranch. She sent her the electric train she wanted, too. Mona was an only child so she was the focus of all Clark's gifts.

And Clark always sent a big box of exotic candies and cheeses from the Schraft store in New York City.

"We had never seen these things," McCroskey said. "I remember thinking, 'Oh my gosh, there is a Santa Claus.'"

She still has a tiny teddy bear and its wardrobe from the FAO Schwartz store that Clark sent her.

Mona's mother, who also was named Mona, made wonderful holiday sugar cookies from scratch. Mona still has the aluminum cookie cutters shaped like a dog, horse, tree and deer. Her mother also made divinity with black walnuts.

A wooden bowl always was full of mixed nuts with a nutcracker in it during the holidays.

The family cut their own pine tree for Christmas at the Yolo Ranch, McCroskey said. They would decorate it with little round frosty balls, lead-draped icicles and tinsel.

She still has some of the Christmas tree ornaments of her childhood, little cardboard drums and bells covered with tin foil because metal was scarce during World War II.

Mona attended Washington School in Prescott during part of her early years, and since it was more than 30 miles southeast of her home, she stayed with her uncle in town during the week. She recalls making Christmas tree chains out of construction paper and playing the part of Mrs. Claus in the auditorium, which now is the library.

McCroskey fostered her love of Prescott history for 14 years by recording 350 oral histories from old-timers for the Sharlot Hall Museum.

While she still calls Prescott home, she now also has a second home in Cuba, N.M., where she has newer fond memories of Christmas.

That community is steeped in Spanish history, and residents participate in a traditional Las Posadas every year. The tradition dates back to the late 1500s in the New World, when Spaniards used it to teach Christianity to the Aztecs in Mexico.

For nine days beginning Dec. 16, candlelight processions commemorate Mary and Joseph's journey from Nazareth to Bethlehem and re-enact their search for shelter. Posada means "place of lodging" in Spanish.

The Cuba residents first stop at the church for a litany, then walk to a different home each of the nine days to re-enact the events at the inn. When they finally get inside, the priest blesses the tree and nativity and everyone partakes of wonderful food such as tamales and posole.

"It makes you think of the real meaning of Christmas," McCroskey said.