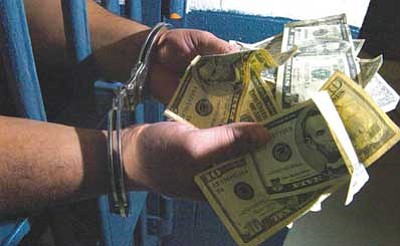 EDITOR'S NOTE: This is the fourth day of a seven-day series about the cost of immigration.

PRESCOTT - In February 2006, the Yavapai County Sheriff's Office discovered the bodies of three illegal immigrants off Highway 89 near Congress.

Investigation revealed that their deaths were the result of a human smuggling deal gone bad. The Sheriff's Office has charged one man with three counts of murder and issued arrest warrants for three other people deputies believe are human smugglers or "coyotes." They are all illegal aliens.

Sheriff Steve Waugh said the agency spends roughly $4 million a year on investigating and housing inmates who live in this country illegally.

Waugh said illegal immigrants comprise 20 percent of the jail's population, which is an estimate because the Sheriff's Office, like other local law enforcement, doesn't keep records on crimes committed by illegal immigrants.

"When we arrest them, we don't ask 'are you here illegally,'" Lt. Andy Reinhardt of the Prescott Police Department said. "That's not a focus of our investigation. We don't have jurisdiction over immigration. That's a federal issue."

"When people ask me why aren't you out rounding these people up, which is contrary to ICE policy, is that how much money you want to spend on doing a federal responsibility?" he asked. "I have no problem dedicating resources if the feds would reimburse us, but at this point of time, they won't."

"I do not want to open another pod in the jail of $1.4 million just to house undocumented aliens because I would rather have that (money) for law enforcement services to provide to the people that are legally here," Waugh said. "The federal government is not taking a strong approach to this, so we are forced to deal with them ... and we don't have any tools to do it. Our only option is 287G."

ICE lately has been extending a hand of cooperation through its guidelines established under section 287(g) of the Immigration and Nationality Act. After four to six weeks of training, local law enforcement would be able to identify, detain and charge illegal immigrants, which isn't the case now.

"Since April, we have had a strong working relationship," Waugh said.

In October, Waugh announced a training and cooperative effort with ICE after nearly a year of working with them on local immigration issues.

"This initiates the process of establishing a memorandum of agreement with the Department of Homeland Security, ICE and the YCSO that will define arrest, custody and transportation guidelines for both agencies," Waugh said.

YCSO, along with the Phoenix Police Department and Pima County Sheriff's Office, are the only agencies in Arizona that will have this training and cooperative effort in 2008.

"If we should train the field deputies and they come up on a coyote, then they can place 'detainers' on those individuals for deportation, which they can't do now," Waugh said. "The only thing they can do now is to make a phone call to ICE. ICE will interview people over the phone and ICE would place a 'detainer' on them;

we would house them."

In the past 12 months, YCSO has deported over 400 illegal immigrants. Of those, 313 were criminal aliens.

Waugh said the federal agents now are more likely to pick up detained illegal immigrants than they were before. Yavapai County Attorney Sheila Polk agreed that ICE's presence in the county is more noticeable.

"Since April, ICE is definitely making a presence here in Yavapai County," she said. "In the past, they have not."

In March, for example, ICE agents deported a dozen illegal immigrants that deputies detained during a traffic stop in Camp Verde, but another group went free when ICE declined to pick them up, Waugh said. It is a case-by-case situation.

Sheriff Waugh's goal is to train six classification detention officers - one for every shift - before training its patrol deputies.

However, the new acquired skill will not lead to targeting day workers or suspected illegal alien neighborhoods, Waugh said.

"This training gives us a better handle on who we have in the jail, and who we are dealing with in the field," Waugh said.

In the past, the Sheriff's Office has helped immigration agents conduct "sweeps" of illegal aliens with outstanding warrants.

During a three-day detail in April they arrested 10 ICE fugitives on administrative warrants and another 25 that were not targets, but authorities determined they have been here illegally as they were looking for those they wanted.

Adjudicating cases of defendants with no legal residency translates into a significant chunk of money for Yavapai County. The county's criminal justice departments do not track the cost associated with prosecution. However, a rough estimate of $6.6 million surfaced at the end of January after the Board of Supervisors requested that information.

The county staff based it on the assumption that illegal immigrants comprise about 20 percent of departments' caseload.

The court staff has been able to track the cost of some services better than others. For example, the need for translators had increased by $57,000 to $207,330 during the fiscal 2006-07 budget cycle.

In 2005-06, the court hired a full-time Spanish translator. It also used freelance interpreters for Spanish, American Sign Language, Vietnamese, Czech and Swahili. Other county departments such as the Public Defender's Office and the Adult Probation Department obtained interpreting services through the court. Yet the Superior Court's needs grew between the two budget cycles from about $92,000 to about $139,000. The court added a part-time interpreter position in this year's budget hoping to eliminate some need for freelance translators.

The Public Defender's Office also included a $20,000 part-time translator position in its current budget, which should decrease the court's translating cost.

When the court adjudicates a case, the county continues to accrue expenses for defendants on probation.

The Adult Probation Department has to supervise all the defendants sentenced to probation regardless of their immigration status or deportation prospects.

"They (illegal aliens) are no different than any other offender," Adult Probation Chief Billie Grobe said. "As long as they are within our community we have the responsibility of supervising them."

A Jan. 31 snapshot of probationers indicated that about 122 illegal aliens out of about 2,000 probationers were on supervised or intensive probation and 127 out of 600 on unsupervised probation.

The Arizona Administrative Office of Courts has generated a list from each county that would help federal agents prioritize deportation of illegal immigrants on probation or those who have served their sentence but have remained in this country.

Sometimes they come back

Deporting illegal immigrants who face criminal charges rather than prosecuting them is not the option that the Yavapai County Attorney's Office has practiced. Polk said her office prosecutes criminal cases based on the evidence, and not on the defendant's immigration status, but it has explored deportation options with ICE.

"What I was looking at was not dismissing charges in exchange for deportation, but whether or not there was something we can do in handling our criminal cases to facilitate deportation," Polk said. "But they have not gotten back with me."

In the absence of a more proactive federal enforcement of immigration laws, Arizona enacted an anti-coyote law, which became effective on Aug. 12, 2005. The law makes it a crime to transport human beings intentionally for profit.

The law is working for the few that authorities are catching, Department of Public Safety Cmdr. Frank Lopez said.

"We are catching a small percentage," he said. "There is a lot of them going down the interstate and we are not stopping them because we can't enforce immigration laws. Human smuggling is a multi-million dollar industry. "

Although the interpretation of the law also has sparked some controversy across the state and the country, some coyotes are serving their time.

"There have been 100 prosecutions at the Attorney General's Office since the law became effective in August 2005," Attorney General Terry Goddard said. "It has been a powerful weapon along with the work that we've done in trying to intercept money transfers ... which are paying for smugglers services. In enforcing this law, we've indicted 16 people in six travel agencies for facilitating the transportation of almost 7,000 people out of Las Vegas."

Because local police do not have the authority yet to detain or arrest illegal immigrants, Waugh said, some coyotes escape prosecution.

"We detain them for a period of time and then we release them because outside of the arrest on a coyote, we really have no authority to arrest or detain illegal immigrants that he is smuggling," Waugh said. "You can't prosecute the coyote unless you have witnesses. It is just a joke."

Goddard agreed that local police already have enough to do without getting involved in enforcement of immigration laws.

"Your sheriff's office, your police departments enforce local ordinances and state laws and they have their hands full just controlling those crimes," he said. "I don't think the solution is to task them with even more jobs."

An effective nationwide work permit system with mandatory identification would have an impact on illegal border crossings and over-stayed visas, Goddard said.

"Approximately 10 percent of those jobs are matched up with permits," he said. "It got to be closer to 100 percent because the jobs are there, they need to be filled and they are not taking the jobs from anybody in this country."

"I sign off on three or four prosecutions a week for people who are illegally manufacturing Social Security cards, driver's licenses and other forms of identification for undocumented immigrants," Goddard said. "We are doing everything we can, but ... that industry is a way ahead of us."

Driving without proper paperwork could turn a traffic stop into the application of the impound vehicle law, which became |effective August 2006, with more serious consequences for the illegal population.

Department of Public Safety Cmdr. Frank Lopez said the impound law, which the legislature created to target the illegal immigrants, is unfair because it sends mixed messages.

The law says that the person must have a valid Arizona driver's license as soon as they establish their residency, Lopez said.

"If they've put kids in school, started working or bought property, they are required to have an Arizona license and any other license would not be valid," Lopez said.

When an illegal immigrant doesn't have valid paperwork, police impound the vehicle.

Lopez said they are impounding between 20 and 40 vehicles a week.

The average tow bill could exceed $500 if it stays in a tow yard for 30 days. Plus, based on the statue provisions, police charge an administrative fee and it varies for each agency.

Chino Valley Police Sgt. Mark Garcia agreed that the law is affecting the immigrants. Not having a valid license and/or insurance results in civil citations only, he said.

But when they fail to appear in court, as most do because of their illegal status, it leads to driver's license and vehicle registration suspensions.

"The next time they are stopped, and their driving privilege and/or vehicle registration come back suspended, they fall under the 30-day vehicle impound," Garcia said. "At this time, we basically have a zero tolerance when enforcing the 30-day impound, be it illegal immigrants or U.S. residents."

At this time, Prescott Valley Police Department does not have any official program in place to address the immigration issue. "But when PVPD comes across an individual at a traffic stop or other violation, the appropriate authorities are notified," said Cmdr. Laura Molinaro, PVPD.