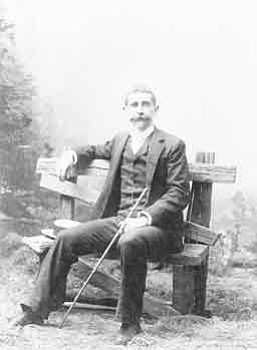 Still at the helm, Dauphin produced Arthur Sullivan's one-act operetta "Cox and Box; or, The Long-Lost Brothers," (based on John Maddison Morton's famous farce "Box and Cox") in January 1886. Sergeant Bouncer, a landlord (Harry Carpenter), has a scheme to get double rent from a single room. By day he lets it to Mr. Box (a printer who is out all night, played by J.E. Brown) and by night to Mr. Cox (a hatter who works all day, played by Joe Dauphin). When the lodgers raise awkward questions, Bouncer distracts them by singing of his military exploits. The plan works until Mr. Cox is given a holiday and the two lodgers meet, discovering that they share not only the same bed, but the same lady. Cox is engaged to marry the widow Penelope Ann Wiggins - a fate that Box escaped by pretending to commit suicide. When the widow sends a letter informing them of her intention to marry someone else, the two comic heroes swear eternal friendship and discover, to their surprise, that they are long-lost brothers!

The popularity of this production warranted a revival in February 1887, along with "The Rose of Auvergne," featuring the Stevens-Dauphin-Carpenter trio. Professor Ludwig Thomas, a fine new musician and conductor, served as the musical director. With such a great leading soprano, who knows what other treats might have been in store? But in March 1887, Jessie Stevens married Mr. C.H. Crouse and left Prescott forever to start a new life in Lake City, Minn.

Not to be daunted, he engaged a professional touring singer, Erba Robeson, to play with him and Mr. Hoyle in Thomas Haynes Bayley's one-act operatic vaudeville, "The Swiss Cottage; or, Why Don't She Marry?" on March 11. A well-trained local chorus enhanced the production, and Professor Ludwig Thomas (piano), and Prof. Merz (violin) accompanied the singers.

Ludwig Thomas, a young German immigrant who became naturalized in Prescott in 1888, assembled a fine orchestra that was soon performing excerpts from Verdi and Donizetti operas with local singers. He and Dauphin formed a musical partnership that gave the town yet another revival of "H.M.S. Pinafore" for the grand reopening of the Prescott Opera House (Howey's Hall) in October 1891. Dauphin gave his farewell performance as the Admiral. Harry Carpenter had moved to Yuma, so Hedrick D. Aitken, the enterprising V.P. of the Bashford-Burmister store and co-manager of the opera house, filled the role of Capt. Corcoran. J.E. Brown, whose head cold had marred his performance in 1882, must have been hoping for a second stab at Ralph Rackstraw. But a younger, more handsome singer had just moved to town: Dr. Fred Waite, the dentist. Brown was demoted to the role of the Carpenter's Mate, but at least he got to sing in the sailors' delightful Act I quartette.

Fred Waite astonished his friends with his fine voice and his pathos as Ralph. Minnie Cline, who had enjoyed a professional career as a leading operatic soprano in Europe, was the new Josephine. She had married W.A. Cline, a local merchant, some time after 1880 and moved with him to Prescott. A stout woman with a powerful set of lungs, she certainly wasn't the ideal physical image of a romantic ingenue. But

her "well-cultivated voice" and her "faultless rendering" of the character elicited great applause (Miner, Oct. 28, 1891).

In 1894, the Calhoun Opera Company came to Prescott with two operettas: Czibulka's "Amorita" and Richard Stahl's "Said Pasha." One would think that local audiences had been primed for professional operetta and would have crammed the house, but it was noted in the newspaper that attendance was mediocre.

Since both Joe Dauphin and Ludwig Thomas had moved to California, Minnie Cline stepped up to the plate and mounted a production of Gilbert & Sullivan's charming one-act operetta, "Trial by Jury," at Patton's Opera House (Sept. 11-12, 1896). Miss Helen Wells sang the role of Angelina, the plaintiff who drags her reluctant fiancé Edwin (J.L. Johnston) to court because he is jilting her for another woman. Hedrick Aitken stole the show as the amorous judge who falls in love with Angelina during the course of the trial. Edwin offers the absurd compromise of marrying Angelina today and his other love tomorrow. The Judge finds this reasonable, but the Counsel (R.B. Burmister), upon checking his books, discovers that marrying two wives at a time is a criminal offense: "Burglaree." The Judge turns down Edwin's offer and proposes to marry Angelina himself. Aitken made a decided hit with his solo, "I'll Tell You How I Came to be a Judge," and, in response to an encore, gave a couple of improvised stanzas, containing local hits, which brought down the house. Minnie Cline herself accompanied the singers at the piano. The success of her production was trumped by the Columbia Opera Company, whose 32 singers lit up the stage with Edmond Audran's three-act comic opera, "La Mascotte," at Dake's Opera House in July 1897. Professional competition was getting stiff.

The last operetta of note before the building of the Elks Theater was Daniel Auber's "Fra Diavolo," performed at Bashford's Opera House on Feb. 27, 1899, by the renowned Andrews Opera Company with its impressive cast of 28 singers. Over 300 people were packed into the little auditorium. Set in the early 18th century, this operetta tells the romantic story of Zerlina, an innkeeper's daughter who is in love with Lorenzo, the penniless captain of the dragoons. Her father intends to marry her to the richest man in the district, the Marquis of San Marco. But the Marquis is, in fact, the notorious bandit Fra Diavolo, who has a reputation for stealing not only money and jewels, but ladies' hearts. In the complicated sequence of events, Lorenzo is led to believe that Zerlina has been unfaithful to him with the bandit, and challenges the rogue to a duel. When the truth of Zerlina's fidelity is revealed, all is happily resolved and the young lovers are united. The newspapers failed to identify the singers. The Andrews Opera Company was booked for a return engagement at Dake's Opera House in March 1901. This time they performed Flotow's "Martha" and Bizet's "Carmen," neither of which fall properly into the category of operetta.

It's odd that the local amateurs did not venture to tackle the other full-length Gilbert & Sullivan operettas, such as "The Pirates of Penzance" or "The Mikado." Joseph Dauphin surely had the ability to take the road less traveled and introduce his audiences to new material, but he took the "safe" route and revived the shows with which he was comfortable and familiar. No doubt it took less effort, and the audiences simply could not get enough of "Pinafore." With the 1891 revival, that operetta had been performed no less than 19 times in a period of 12 years. And Minnie Cline would revive it again at the Elks Opera House in 1905.

Pauline Markham and Joseph Dauphin exerted a powerful influence on the course of the amateur theater in Prescott. They developed in local audiences a taste for musical theater, provided a performance outlet for vocally talented citizens, and discouraged, in a sense, the tradition of full-length comedies and melodramas that had been so popular with the Prescott Dramatic Club between 1878 and 1881. Further attempts to stage full-length legitimate plays after 1882 met with neither serious attention from the press nor enthusiastic patronage from audiences. And since the brightest lights of the legitimate amateur stage moved away from Prescott in a gradual exodus that began in 1879, the musical dilettantes of Prescott rose, under Dauphin's leadership, to fill the gap and make the local theaters ring with the stirring strains of Sullivan, Offenbach, and their "light opera" contemporaries.

Thomas P. Collins is a volunteer at Sharlot Hall Museum and author of the newly release book "Stage Struck Settlers in the Sun-Kissed Land: The Amateur Theatre in Territorial Prescott, 1868-1903," which can be purchased in the Sharlot Hall Museum Store in the historic Bashford House.