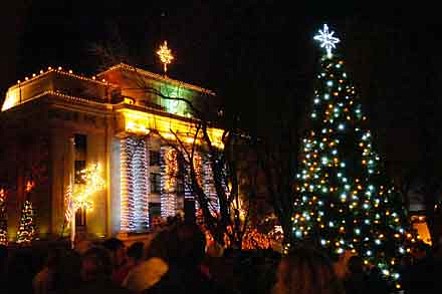 PRESCOTT - Five more of the towering elm trees on the Yavapai County Courthouse Plaza will sport a spiral of sparkling lights this year.

And that will bring the organizers of the downtown Christmas lighting one step closer to the goal of eventually having a circle of about 50 of the plaza trees lit up for the holidays.

"Our goal is to keep adding trees," Prescott Chamber of Commerce Chief Executive Director David Maurer said. "If we were able to do 50 trees, that would pretty much surround the plaza."

This year, the decorated trees will number 30 - five more than the 25 that featured lights last year.

Several years ago, organizers of the effort to light Prescott's downtown began focusing upward, by wrapping lights high into the trees that surround the county courthouse.

Each year, Maurer said, organizers have been able to add more trees to the effort.

"We just want to make the event the best it can be - that's why the city contributes every year," Bristol said.

Along with the city's contribution, the effort also got more than 30 donations from others in the community, including $5,000 and $2,500 contributions, and a number of $1,250 donations.

Maurer explained that the lighting of each tree costs about $1,275. Organizers came up with an "adopt-a-tree" approach, encouraging donors to give $1,250 to cover the bulk of the per-tree cost.

Fund-raising letters went out in the spring to encourage renewals of previous donations, as well as new contributions.

Along with the row of lighted trees, this year's decorations also will include the traditional lights on the four sides of the courthouse building, Maurer, said, such as the large candles on the west side, as well as the lighted courthouse columns.

While a lighting consultant firm does much of the installation work, volunteers still help with various aspects. Maurer said crews from Arizona Public Service, UniSource, and Cable One all help to put up some of the decorations.

Even though the courthouse is the centerpiece, the annual Christmas decorations do not end at the plaza boundaries.

Bristol noted that the city also puts up several hundred festive banners each year around the downtown area. The money for the banners came to Prescott several years ago through an Arizona Department of Commerce Rural Economic Development Initiative grant.

Lighted decorations also adorn many of the street light poles in the downtown area.

Traditionally, all of the lights go on for the first time during the traditional Courthouse Lighting event, which will take place this year on Dec. 1.

Live musical groups will perform on the courthouse plaza beginning at 5 p.m. The actual lighting ceremony will start at 6 p.m.