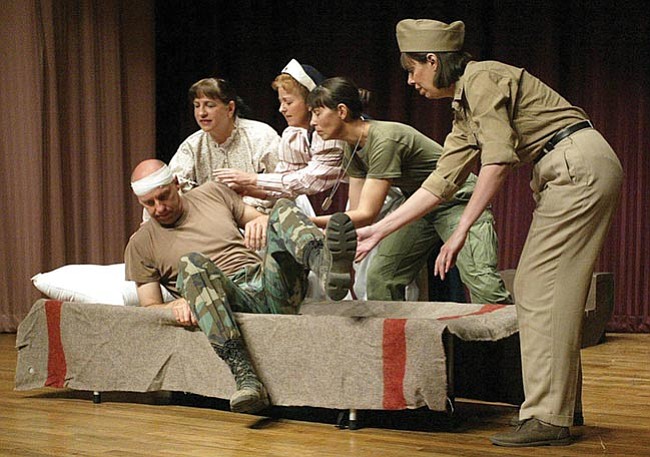 The Daily Courier/Les Stukenberg Members of the Prescott Stage Company perform a tribute of women veterans during the Women Veterans Recognition Ceremony Monday at the Bob Stump Veterans Affairs Medical Center in Prescott.

PRESCOTT - Four military nurses, from four different eras, worked to save a single soldier, as they shared feelings of shock and outrage at the carnage they saw.

The nurses and the soldier were members of the Prescott Stage Company that produced a dramatic skit honoring women in the service at the Bob Stump Veterans Affairs Medical Center on Monday. Their performance earned them a standing ovation and moved many in the audience to tears.

The Women Veterans Recognition Ceremony honored women who have served in the American military, reflected on the history of women in the service and looked toward the future both in terms of the role women play in the military, and how services like the VA medical system will adapt to meet women's needs.

"The Prescott VA does a good job of serving veterans. It's come a long way from when I first came here in the 1970s, and there were just a handful of women," said Carole Wagner, the hospital's Women Veterans Program manager. "Back then, a woman could barely find a women's restroom. I think the VA has tried to meet women veterans' needs over the years. If you're in the VA system, they'll even pay for pregnancy now."

The ceremony featured the presentation of colors, the national anthem and an invocation. During a song medley, in which female veterans stood when the medley reached the theme of their branch of the service, Betty Moseley Brown, a member of the U.S. Marines Corps from 1978 through 1992, was among those who stood at the mention of the "Halls of Montezuma."

"We want (female veterans) to know you're never forgotten, and you're always in our hearts. Washington is often looked at badly, but I assure you, their hearts are in the right place," said Brown, the associate director of the Center for Women Veterans and keynote speaker for the ceremony. "People have told me that I don't look like a Marine, but I ask them, what does a Marine look like? What does a woman veteran look like? There are over 1.7 million women veterans, of all ages and backgrounds."

Brown reflected on the history of women in the service, from the early days when women could serve only in menial capacities, on to the more progressive eras, in which women gradually gained headway in the struggle for equal footing with men in the service.

"You know where we've been, but now I want to tell you where we're going," said Brown. "It's a new day at the VA. In Congress' wisdom, they knew if we left it up to the VA to make policies on women vets, it would never get done. That's why the Center for Women Veterans exists, and we're still fighting for the services that women need, and making some great strides."

Brown said that the center works to secure sufficient healthcare for women veterans, not just with commonly thought of problems afflicting women, such as breast cancer, but also issues like heart disease, which Brown said is the number one killer of women. She said that mental health issues are also of utmost importance, including depression, post-traumatic stress disorder and sexual trauma.

"The bottom line is this: What do women vets want? They want what they're entitled to," said Brown. "We want to be respected and acknowledged for what we've done, we want to be employed when we return from the service, and we want good health care. We only want what we deserve, and no more; just like any other veterans."