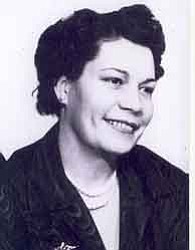 Helen Patton Theobald, 92, passed away on Sept. 17, 2007, in Redlands, Calif., at Assistencia Villa, where she had lived for the past four years.

Helen was born to Fred and Minnie Patton on July 21, 1915, in Luna, N.M. As a child, she and her brother moved with her family to Arizona becoming one of the pioneer families in the Skull Valley area. She attended school in a one-room schoolhouse in Skull Valley and high school in Prescott.

In 1936, she married George Theobald and later moved to Childs, Ariz., where he was employed at the electric plant. They moved to California with their son, George in 1942. Following the death of her husband, she returned to Arizona where she trained as an LVN in Prescott. Upon graduation, she returned to San Bernardino, where she became director of nurses at Shea Convalescent Hospital. She retired after many years of loving care to others.

Helen is survived by her son, George (Sue); brother, Fred (Edna); sister, Lucile Morse, all of Arizona. She was preceded in death by her brother Bucky.

She was lovingly known as "Punkin" to her grandchildren, Lance (Corina) and Dellana (Mark) and great-grandmother to Branden and Rhiannon all of California.