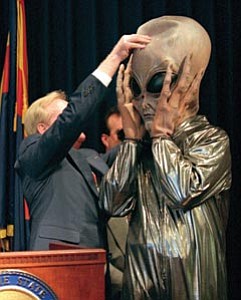 The Associated Press/Scott Troyanos --- Arizona Gov. Fife Symington pulls a mask off of aide Jay Heiler, dressed up as an alien, during a late afternoon news conference at the state capitol in downtown Phoenix Thursday June 19, 1997. Symington, earlier in the day, said he would order the Arizona Department of Public Safety to look into the mysterious lights seen over Phoenix, but later insisted he was joking.

Ten years after the "Phoenix Lights" UFO incident, former Arizona Gov. Fife Symington, III, now says he saw an unidentified object that night, even though he originally did not say so publicly.

"It was enormous and inexplicable," he said in an exclusive interview from Phoenix. "Who knows where it came from? A lot of people saw it, and I saw it too."

On March 13, 1997, during Symington's second term as governor, thousands saw a vast triangular and V-shaped object, gliding slowly and silently across the Arizona sky. Witnesses throughout the state estimated that the eerie, lighted objects were bigger than many football fields, as much as a mile long.

Sen. John McCain, a friend of Symington's whom the former Republican governor describes as "open-minded," acknowledged the Arizona lights at a 2000 press conference.

"That has never been fully explained. But I have to tell you that I do not have any evidence whatsoever of aliens or UFOs," he said.

The evidence for a possible UFO, which simply means something in the sky that no one can identify, lies in the fact that countless witnesses reported seeing low, gigantic, technological flying machines that blocked out the stars - not merely lights.

Symington says he saw a large triangular "craft of unknown origin" with lights. "It was dramatic. And it couldn't have been flares because it was too symmetrical," he says. "It had a geometric outline, a constant shape."

People sometimes confuse the sightings of the objects at around 8:30 that evening with the row of lights videotaped at 10 p.m. and shown repeatedly on television news. These later lights most likely were flares, according to video analysts. People who saw the earlier objects were outside watching the Hale-Bopp Comet, and saw something entirely different.

Symington's latest statement marks a turnaround. He is famous for spoofing the incident at a 1997 news conference, where he introduced a handcuffed member of his staff in an alien costume as the culprit responsible for the Phoenix Lights. Symington now wants to set the record straight.

He explains that Arizona was "on the brink of hysteria" about the UFO sighting at the time, and the frenzy was building.

"I wanted people to lighten up and calm down, so I introduced a little levity. But I never felt that the overall situation was a matter of ridicule," he says.

The former governor says the incident remains unsolved, and deserves an official investigation. The U.S. government has never acknowledged that something was in the sky that night.

Former Phoenix city councilwoman Frances Barwood, now living in the Prescott area, was the only elected official to launch a public investigation in 1997, but she said people stonewalled her at every turn. Barwood spoke with more than 700 witnesses. "The government never interviewed even one," she says.

Symington called the commander at Luke Air Force Base, the general in charge of the National Guard, and the head of the Department of Public Safety to request an explanation. None of them had answers, and they, too, were "perplexed," he says.

In 2000, the U.S. Department of Defense maintained that it could not find any information about the triangular object, in response to a search ordered by a U.S. District court in Phoenix on behalf of witnesses.

Bolstering Symington's announcement is independent documentation of similar unidentified flying triangles in the early 1990s by the Belgian Air Force and the British Ministry of Defense. Both called the objects genuine unknowns, and not U.S. aircraft.

More information is available at www.freedomofinfo.org.

(Leslie Kean is a widely published New York investigative reporter. She is a co-founder of the Washington-based Coalition for Freedom of Information. Her e-mail address is lkean@ix.netcom.com)